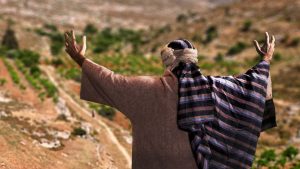 We can sometimes forget how radical the teaching of Jesus was and still is. He was once asked, “what is God like?” His answer: God is like a Father. This was so radical because before Jesus, no one had ever described God as Father. In fact, this is something unique to Christianity because no other religion describes its deity as Father. What a privilege it is to have God as our Father. It is in this context that I try to imagine myself in the parable of the lost son. For those who may not be familiar, I have included in the parable in full.

Jesus continued: “There was a man who had two sons. The younger one said to his father, ‘Father, give me my share of the estate.’ So he divided his property between them. Not long after that, the younger son got together all he had, set off for a distant country and there squandered his wealth in wild living. After he had spent everything, there was a severe famine in that whole country, and he began to be in need. So he went and hired himself out to a citizen of that country, who sent him to his fields to feed pigs [for the Jew, this is rock bottom]. He longed to fill his stomach with the pods that the pigs were eating, but no one gave him anything.

When he came to his senses, he said, ‘How many of my father’s hired servants have food to spare, and here I am starving to death!  I will set out and go back to my father and say to him: Father, I have sinned against heaven and against you. I am no longer worthy to be called your son; make me like one of your hired servants.’ So he got up and went to his father.

But while he was still a long way off, his father saw him and was filled with compassion for him; he ran to his son, threw his arms around him and kissed him. The son said to him, ‘Father, I have sinned against heaven and against you. I am no longer worthy to be called your son.’ But the father said to his servants, ‘Quick! Bring the best robe and put it on him. Put a ring on his finger and sandals on his feet. Bring the fattened calf and kill it. Let’s have a feast and celebrate. For this son of mine was dead and is alive again; he was lost and is found.’ So they began to celebrate.

Meanwhile, the older son was in the field. When he came near the house, he heard music and dancing. So he called one of the servants and asked him what was going on. ‘Your brother has come,’ he replied, ‘and your father has killed the fattened calf because he has him back safe and sound.’ The older brother became angry and refused to go in. So his father went out and pleaded with him. But he answered his father, ‘Look! All these years I’ve been slaving for you and never disobeyed your orders. Yet you never gave me even a young goat so I could celebrate with my friends. But when this son of yours who has squandered your property with prostitutes comes home, you kill the fattened calf for him!’ ‘My son,’ the father said, ‘you are always with me, and everything I have is yours. But we had to celebrate and be glad because this brother of yours was dead and is alive again; he was lost and is found.’ Luke 15: 11-32 NIV

God’s original plan was always for us to live within His household, be a part of His kingdom and for us to live our lives His way [the best way], for His glory. God loves us and wants us to choose Him, not by coercion but freewill. He led the way by loving us first, even before we knew Him, because only love, the sole power that can conquer the human heart, can summon a response of love. This is how He created us. God desires our hearts and wants us to desire His. When we reject God and His way of living life, we are like the prodigal son who sought independence from his father. Like that son, we strike out on our own to live life our way, because we think we know what is best for us and we certainly won’t be told how we ought to live life. I notice that the father doesn’t rebuke the prodigal son for seeking independence from him. He doesn’t force the son to stay either. So it is with God, He never overrides our free will. He gives us the right to choose. Furthermore, I suspect the father in this parable was grieved by his son’s actions. Certainly, God is grieved when we rebel against Him.

The Bible continually emphasises God as the sovereign author of life. This implies that as the author of all life,  He knows what is best for us. Faith is a demonstration of our trust in God and His love for us, that He wants the very best for us [Luke 11:11-13]. If we let Him, He will lead us to the very best outcome in life [Jeremiah 29:11], abundant life here and now, and for eternity. If we choose to go it on our own like the prodigal son, we will – like him – find out that life without the Father eventually leads to a place of desolation and hopelessness.

God’s love for us is unceasing, for even when we are unfaithful to Him, He is faithful. Therefore, like the father in the parable, He is always on the lookout for us [the father would not have seen his son from a long way off if he wasn’t on the lookout for him]. God’s sovereign offer of salvation means that nothing irredeemable can happen to us. There is no mess we can get ourselves into that is irredeemable for Him. He is on the lookout for every person who has turned his back on Him and left His household, for it is not His desire that any should be lost [2 Peter 3:9]. Whether you have never known God or you were once a Christian and you turned your back on God, Jesus tells us that if we turn away from living life our way and come back to God, we will be received with compassion and love.

So where are you in this story? Are you out there still living life without the Author of life? Or have you hit rock bottom and you are currently wallowing in depression and hopelessness? Or are you trying to find your way back to God but not sure what sort of reception you will get? The father did not forget his prodigal son and offered no judgment when the son returned. You are not forgotten by God, while you may not know Him; He knows every sinew of your being, for He put you together. Job 10:8-12.

As I reflect on this story, I have found myself acting like the older brother. I sometimes forget the fact that I am named in God’s family [Ephesians 3:15] and I have the inheritance of Jesus because I am an adopted child of God by the Holy Spirit. Therefore, I am envious when He forgives another when He blesses another. I want to see God’s wrath on those who have decided to live without Him rather than His love and compassion. I believe the last paragraph is a caution to us Christians, we ought to be as open as the father in the parable, ready to love and show compassion to the prodigal child. Ask yourself, do you have the father’s heart for the lost?

So where are you in this story? As you ponder, I will you leave you with these lovely words from one of my favourite songs:

And you tell me that you’re pleased

And that I’m never alone….

I’ve seen many searching for answers far and wide

But I know we’re all searching

For answers only you provide

’cause you know just what we need

Before we say a word….

And I’m loved by you

Lovely write-up. Very thought provoking. ‘Behold what manner of love the father has bestowed on us that we should be called children of God’ 1 John 3:1

Would you wash Judas' feet?

That sinner over there