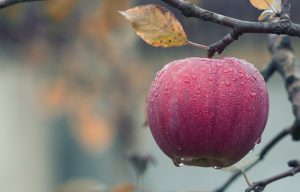 Last week I wrote about freedom from slavery. Because of Jesus, we are no longer slaves to sin and we, therefore, do not have to sin. But we still sin. As children of God, we have His Spirit and Word to guide us through life, however, there have been so many times in my life where I have ignored the caution of the Holy Spirit and ploughed on, eventually giving into temptation. The truth is that yielding to temptation is often a choice. Even when we know that a particular behaviour or course of action is contrary to God’s word, we let our desires override the warning signs [James 1:13-15].

This is not new. God created the world, declared it good [Genesis 1:31], and then put man and woman in charge of it. There was no striving, no suffering, no sickness, no pain, no death. Life was in a word, perfect. Yet, both Adam and Eve were not content to live in this paradise and obey God. They decided to break the one commandment God has given them despite the warning that they would die if they did [Genesis 2:16-17]. Like all of us at various points in our lives, their desire for the apple won the day. We will be tempted every day, so God calls us to be on our guard [1 Peter 5:8] because the moment we let our guard down, the devil will pounce. Where was Adam when the devil was deceiving his wife? Why didn’t either of them say “no” to the apple? Why don’t we so “no” before we fall into compromising situations?

I don’t know if you have ever let someone down because of your bad choices, it is a terrible feeling. Not so long ago, I attended a friend’s birthday party. While at the party, I let my guard down and ended up behaving badly. A young person that I mentor was also at the party. I was jolted to my senses when he literally walked out because he was disappointed by what he saw and I was no different from everyone else. For weeks afterwards, I was haunted by shame and guilt of what I had done and I struggled to forgive myself. This young person reads my blogs and looks up to me, and I let him down. I felt I was a fraud. As it was with Adam and Eve, the consequences of eating the apple outweighed the satisfaction from eating it.

The Bible tells us that when Adam and Eve heard God walking in the garden after they had sinned, they hid [Genesis 3:8-10]. For the first time, they were afraid of God. Fellowship with God was broken and replaced by shame and guilt. We can all relate to this. We see in the media when a celebrity is caught in a scandal, they try to hide from the cameras. We do the same thing. Sometimes we hide behind denial and lies while the shame and guilt eat us up from within. On other occasions, we hide behind our pride and that prevents us from acknowledging our wrongs and seeking redemption. As a principle, God’s redemptive grace cannot coexist with pride.

As for my situation, God gave me the grace to eventually let go of my shame and guilt. In the process of seeking God’s forgiveness, I told my wife what had happened and reached out to my mentee to apologise for my actions. They were both gracious in their responses. This is a lesson for all of us in dealing with others when they fall, remember that but for the grace of God, that would be you. As such, always extend grace rather than judgment. That said, moral failure always has a cost. My actions let down people I cared about and their disappointment will serve as a warning next time I’m in a similar situation.

Lastly, it is worth noting that forgiveness doesn’t mean there won’t be consequences. God never promises that we won’t face the consequences of our actions. Adam and Eve lost their place in the garden as a consequence of their sin. However, leaving the garden also meant that Adam and Eve no longer had access to the tree of life, so they couldn’t eat of its fruit and live eternally in their sinning state [Genesis 1:21], forever separated from God. This was God’s grace and mercy in action. Furthermore, upon their eviction, God’s rescue plan to save all of us was set in motion. Today, because of Jesus we are no longer condemned to eternal separation from God, we can choose salvation. As Paul puts it: “therefore, there is now no condemnation for those who are in Christ Jesus” [Romans 8:1 NIV].

In this life, there will always be temptation. That apple that promises to satisfy your desires never does. You can say “no” to temptation through the power of Jesus. But if you do fall, do not let yourself remain in the bondage of shame and guilt. God never says “no” to a contrite heart [Psalm 51:17]. “If we confess our sins, He (God) is faithful and just and will forgive us our sins and purify us from all unrighteousness.” [1 John 1:9 NIV]. We know this is true, not only because it is God’s word but because of the relief we feel when we confess something we have been hiding. God wants to reunite you to Him; His grace is without limit [Romans 5:20]. Choose salvation, don’t let an apple separate you from God.

Well said; may we all continually pray for the Grace to get back on the race again when we fall. What a stark reminder than sin cannot separate us from the love of Christ!! Thanks for this most needed reminder. God bless your ministry🙏🏽

“That apple that promises to satisfy your desires never does”. Love that!

Read your article earlier and thought though everything was good and perfect but how come Adam and Eve had a ‘weakness’ for this Apple? Why? My thought was that God created a “perfect free will environment” where He has given us all that we need, where His strength is made perfect in our weakness and it is up to us (free will) to tap into it (His strength). But how? If you gain from someone you spend more time with them. Simple but not so easy, that’s why our minds need training. You train for your muscles to gain strength so let’s train our mind muscles.

Seondly, we all have a weakness somewhere and there’s that one, that particular one that is our own apple, eating it steers you away from the purpose of God, stay away from it and you’d remain in God’s presence fulfilling purpose!