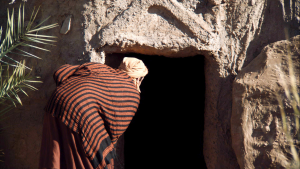 “Jesus is both compelling and costly” a friend sent me in an encouraging email earlier this week. I have been meditating on his words because it means that if I choose to follow Jesus, I have to give up what I want for He wants. I can no longer live my life as I want, I must submit my desires, ambitions and my very self to His will daily. Anyone going through this can attest that it is hard and costly. That said, Jesus did warn that anyone who chooses to follow Him must first count the cost [Luke 14:26-30]. But He did also liken our reward for following Him to finding a priceless pearl so precious that it compels us to give up everything else to possess it [Matthew 13:44-45].

The cost is both ways though. His eternal, unconditional love for us, compelled Jesus to give His life for us. He, through whom everything was created, who is the Heir of all things and upholds the universe by the word of His power [Hebrews 1:1-3] did not want His kingdom without us. To redeem us from the power of sin and death, something we are unable to do for ourselves, He condescended to become one of us. After living a life of austerity, He allowed the very creatures He came to save to torture and kill Him. He paid the ultimate price for us.

This weekend, updates are pouring in on the death toll as six churches and hotels were bombed simultaneously in Sri Lanka. Yesterday, there was news of the persecution of Christians in China. In Nigeria, Christians are regularly slaughtered by Boko Haram. Sadly, religious persecution is commonplace today and it is not restricted to Christians as only a few weeks ago, Muslims were murdered in New Zealand. Jesus who values our freedom so greatly that He gives us the right to choose or reject Him did not immune Himself from persecution either. So He stands with all who are persecuted and will one day deal with the hatred and evil of this world. He will have the final say. Ever wondered about the shock of those who killed Jesus when they met Him after they died?

Stephen was the first Christian to be martyred [Acts 6-7]. He was falsely accused and arrested as a dissident by the religious leaders because of his faith. He boldly explained his faith and confronted the leaders about their persecution of the prophets and Jesus, so they stoned him to death. I wonder what the other disciples must have been thinking when that happened? I imagine the words of Jesus about counting the cost would have echoed in their thoughts. Indeed, 11 of the 12 Apostles would go on to suffer martyrdom.

How would you feel if you were a Christian in Sri Lanka, China or Northern Nigeria? Would you be prepared to risk it all for your faith? If you say “yes”, know that even if you live in relative security now and you don’t have to worry about being arrested or killed, the book of the Revelation foretells widespread persecution and tribulation of Christians in the future [Revelation 6-16]. So it will get worse for Christians and there will be a sifting of those who hold on to their faith no matter the cost and those who will deny it under pressure. The question we must all ask ourselves is “what price am I willing to pay for my faith?”. This is no longer an abstract question.

The Bible says “… if Christ has not been raised, our preaching is useless and so is your faith.” [1 Corinthians 15:14 NIV]. This is true because everything about Jesus hinges on the resurrection. If it didn’t happen, then He joins all the other dead heroes on the footnote of history and His claims are vacuous words. If He did rise from the dead, that changes everything. It means ALL His claims are true and He has the power to keep His promises [2 Corinthians 1:20]. It means we can risk everything to follow Him. It means that no situation, not even death, is irreversible because He will make all things new [Revelation 21:5]. It means that persecution for His sake is not meaningless and whatever price we pay for our faith is a pittance in comparison to the reward we will receive [1 Corinthians 2:9]. It means Jesus must be the preeminent in our lives and pivotal to how we live in the here and now.

If the tomb is empty and He is alive, then the very first Easter Sunday is the most important day in history. If it means nothing to you, ask yourself these questions: “if Jesus is real and alive, would I want to know?” and “What would I do if the claims of Christianity are true?” I believe the first question compels anyone seriously seeking the truth to closely examine Jesus while the second question dictates that you stake everything on Him, His claims and promises.

Paul, who was no stranger to suffering, persecution and ultimately martyrdom, listed some of the costs of following Jesus [Romans 8:35-36] to the Christians in Rome but that chapter concludes with these glorious words: “For I am convinced that neither death nor life, neither angels nor demons, neither the present nor the future, nor any powers, neither height nor depth, nor anything else in all creation, will be able to separate us from the love of God that is in Christ Jesus our Lord” [Romans 8:38-39 NIV]. Would you give up everything to follow this Jesus?

What do I do with my doubts?