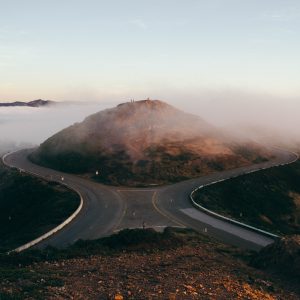 Is who you think God is accurate? Sometimes we view other people as we would like them to be which may not be an accurate representation of who they are. Sadly, we can do the same with God. We imagine God as we would like Him to be and then make assumptions about His nature which are incorrect. The problem with believing something about God which is false cannot be underestimated. This is why one of the primary reasons to read the Bible is to get to know God. He has revealed Himself in the pages of scripture for us [Romans 15:4, 2 Timothy 3:15-17].

One of the many things I am coming to understand about God is that He does not sit on the fence. For instance, God is just [Deuteronomy 32:4]. This means that if He blesses what is good, He must curse what is evil. This also means that if He makes a promise, He must keep it because a just God must keep His word. This is evident in the history of Israel as captured in the Bible. As God promised, He delivered them from bondage in Egypt and then brought them to the promised land. However, before entering the land, God gave them His laws, then made and ratified a covenant with them. Their fate would be determined by how they lived by those laws [Deuteronomy 30:15-20].

Moses, after giving God’s laws, declared: “If you fully obey the Lord your God and carefully follow all his commands I give you today, the Lord your God will set you high above all the nations on earth. All these blessings will come on you and accompany you if you obey the Lord your God” [Deuteronomy 28:1-2 NIV]. For the next 12 verses, he outlines these blessings such as fruitfulness in every facet of life and remaining undefeated in battle, etc. However, Moses also warns the people about what would happen if they chose to disobey God: “however, if you do not obey the Lord your God and do not carefully follow all his commands and decrees I am giving you today, all these curses will come on you and overtake you” [Deuteronomy 28:15 NIV]. For the rest of the chapter, he also outlines the curses such as famine, disease, defeat in battle, plagues, invasion from other nations and exile. The curses progressed from barrenness in the land to oppression in the land by foreign nations and finally being exiled from the land.  We gladly accept that God blesses but we sometimes to struggle to accept that God also curses. The truth is, if God is just, He can’t do one without the other.

We also readily sing about God’s love but so often we forget about His wrath. We really shouldn’t because God always means what He says [Isaiah 55:10-11]. Unfortunately, the Israelites didn’t always live as God’s people, the books of Judges as well as 1 and 2 Kings, in particular, outline this in vivid detail the consequences that followed. Israel suffered incredible famine that fulfilled Deuteronomy 28:55-57 when they were under siege by Assyria [see 2 Kings 6:24-30] and they were eventually taken to Assyria and Babylon as exiles [2 Kings 17, Jeremiah 39]. Lest we think that God’s curses are only in the Old Testament, Jesus cursed the unrepentant towns He preached in [Matthew 11:20-24]. Those towns, Chorazin, Bethsaida and Capernaum were thriving places in days of Jesus, however, today they are ruins and you have to excavate to find traces of their remains. We need to take God seriously.

The Bible reveals a God who shows both unfathomable goodness and severe judgement [Romans 11:22]. He loves us sinners so much He gave His life to redeem us but He intensely hates sin. When He pours out His anger on sin, we can barely read the words with which its described. We see the outcome of God’s wrath on Israel’s disobedience in the book of Lamentations. However, we also see God’s reluctance to punish Israel, especially in Jeremiah. Jeremiah appealed to the people even when they were under siege, that if the turned away from their sin, God would deliver them from their impending disaster. Yet they refused to listen (they are called a rebellious people several times in the book of Ezekiel). They failed to notice God’s simmering anger as their woes progressed from hunger and famine in the land to exile when God’s wrath was poured out on His people. Paul tells us how God’s wrath is being revealed today [Romans 1:18-32], there are signs of God’s wrath simmering today and we ought to take heed. I have heard people make a distinction between the God of the Old Testament and the God of the New Testament, there is no such distinction in the Bible. We are told they are one and the same [Hebrews 1:1-3 & Hebrews 13:8] and anyone who doubts God’s wrath should read Revelations chapters 6 to 16.

I am grateful that God knows we cannot keep all His laws. He always makes provision for us to receive forgiveness, God’s mercy. In the Old Testament this provision was made through animal sacrifices but today, the provision is made in Jesus. I am thankful for His mercy because it means that He treats us better than we deserve but we dare not take it for granted. It cost Him everything. The amazing truth is that through the cross, Jesus took the punishment for my sin upon Himself [Hebrews 9:14, 22] and demonstrated God’s mercy [Ephesians 2:1-8]. When we accept Jesus, He swaps the curse that is meant to come with our sin for His blessing and inheritance [Galatians 3:13-14]. This is the tangible expression of God’s love [John 3:15-18] and it is an offer available to all of us in Jesus. Will you accept it?

As I reflect on my life, I am convinced that my greatest deficiency is not truly knowing, comprehending and believing how God […]

Years ago, I was chatting with a friend about praying, and he said something like: “it’s been so long since I prayed […]


We so often forget, the other side of God, the One who punishes sin. It is a true thing that God has yet to punish this world for killing his Son. May we never take God’s love for granted, Amen


Our God is Love, and His Love for us is unimaginable. He’s also Holy and Righteous and hates sin. But we thank our Lord Jesus Christ that through His sacrifice on the cross, we can confess our sins and receive forgiveness.

Some thoughts on suffering