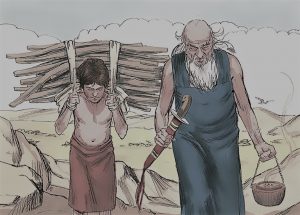 One of my greatest joys as a father is to hug my kids. They seem to know and dole out hugs with reckless abandon, especially my little girl. I know it won’t be long before they start feeling ‘too cool’ to hug their daddy. I cherish those moments and I hold both of them tight, really tight. Reading through Abraham’s wait for Isaac, I can’t begin to imagine what it must have been for him to hold Isaac. He went through such an experience in waiting for that child, he must have held him tight, really tight. And then one day, God puts Abraham to the test.

Following God involves an element of risk, risk on my part because to act in faith, I must venture into the unknown. For someone like me who by default is risk-averse, faith can be a struggle. Most of us have seen that cartoon of a man stranded on the edge of a mountain in the midst of a fog with danger lurking behind him. He calls out to God, ‘God help me’, and back come a voice ‘jump!’ The man doubtfully, retorts ‘God please help me’ and back comes the voice again, ‘jump!’. Some cartoonists show the man jumping and landing safely on solid ground that was not visible to him at the edge of the mountain. Some cartoonist, illustrate the man refusing to jump and taking his chances with what lies behind him. I have been on both sides and honestly, it doesn’t get any easier because my mind and desire for self-preservation generally tends to get in the way of faith.

I doubt any of us can truly understand what Abraham must have gone through when God asked him to sacrifice his son, his only child, the one he had waited decades for as a burnt offering [Genesis 22:1-2]. The very next verse is momentous, it illustrates absolute obedience to God because early the very next day, Abraham sets out with Isaac to do as God commanded. I am certain I would have objected, questioned God or flat out refused. I often wonder whether or not he told Sarah, his wife, what God had asked of him. If he did, what was her response? In any case, this test from God is one we all face in varying degrees. Isaac was God’s special gift to Abraham, his most cherished gift. However, the Giver of the gift was asking would you give up that gift in obedience to Me? What is that gift you cherish most in your life? Is it your children, your spouse, your home, your job? We often forget, but these are all gifts from a benevolent Father. Every now and then, we may be asked to choose between the gift and the Giver or the gift is taken from you without your agreement. When this happens, do you still trust the Giver?

Abraham sets out on his 3-day journey to the appointed destination with Isaac and two of his servants. Nearing the destination, he tells the servant to wait while he and Isaac go to worship and then he says something that someone recently pointed out during a message I was listening to. He said to his servants, “Stay here with the donkey while I and the boy go over there. We will worship and then we will come back to you.”[Genesis 22:5 NIV]. The commentary in the Amplified Bible states that the last phrase “…we will come back to you” is not Abraham lying to his servants. Abraham believed that the God who had promised him Isaac as the heir through whom he would become the father of a nation was able to give him Isaac back. He believed God would keep his promise. When Isaac asked him what must have been a heart-wrenching question: “…father I see the fire and the wood, but where is the burnt offering…” [Genesis 22:7]. Abraham’s response when he said “…God will provide” not only underlined his faith in God but was also a prophetic statement because centuries later near the same place, God would offer up His Son for you and me.

Another thing that strikes me in this story, is Isaac’s response. He wasn’t a baby or toddler when this happened. He was old enough to help his father carry the wood and ask about the burnt offering. Scholars put his age in the 20s or early 30s. If that was his age, then he was old enough to resist his centenarian father. Yet he didn’t, he lay on the wood and allowed himself to be bound. This also prefigures Jesus who willingly laid down His life [John 10:18, John 19:11]. Isaac could have overpowered his aged father at any point, just as Jesus could have summoned a legion of angels to His defence [John 18:36]. I wrote a while back about the people around us watching us, especially our children. It is not a stretch to believe that Isaac saw his father live out his faith in God and followed suit. He literally trusted the God of his father with his life.

God stopped Abraham as he lifted the knife to kill his son. Abraham’s faith, his blind trust in God, pleased God because God says “Do not lay a hand on the boy, do not do anything to him”. Now I know that you fear God because you have not withheld from me your son, your only son.”[Genesis 22:12 NIV]. Would God say the same thing about you and me? Do we cling so tightly to the gifts God has given us that we cannot imagine losing or giving it up? Corrie ten Boom once said “Hold everything in your hands lightly, otherwise it hurts when God pries your fingers open.” Those are words worth reflecting on if there is anything in your life you cling to too tightly. It is also worth remembering that God released His Son to die on a cross for our sakes, in one act becoming both the Gift and the Giver so that we may have the imperishable gift of eternal life. He says to us, cling to Jesus, hold on to Him as tightly as you can and hold everything else loosely.

Father, I want to know Thee, but my coward heart fears to give up its toys. I cannot part with them without inward bleeding, and I do not try to hide from Thee the terror of the parting. I come trembling, but I do come. Please root from my heart all those things which I have cherished so long and which have become a very part of my living self, so that Thou mayest enter avid dwell there without a rival. Then shalt Thou make the place of Thy feet glorious. Then shall my heart have no need of the sun to shine in it, for Thyself wilt be the light of it, and there shall be no night there. In Jesus’ Name, Amen. [ A.W. Tozer: The Pursuit of God]

Kierkegaard would be proud…

Thank you Charles for another great message. May we trust God and step out in faith like Abraham.

Are you a good employee?