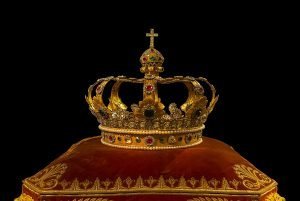 While casually humming the popular song, “God is so good to me” recently, a thought occurred to me: “why is God good?” There is a myriad of answers here but my thoughts drifted to God’s system of government. The Bible presents God as the sovereign King [Psalm 47:7], which makes His system of government a monarchy. While many of us have never experienced a real monarchy where the king is the only and final authority, it is the reality of Christendom. Christians are subjects and servants of the King.

God’s kingship means there is no higher authority to appeal to and you can’t sue God. In His kingdom, there is no parliament, no congress, no supreme courts, no elections, no referendums and God cannot be reprimanded or impeached. We may find our designation as servant or slaves uncomfortable; I know I do, and to some extent, this is sometimes reflected in my relationship with God. When you think of the difference between us and God, it is an act of mercy that we can question Him.

The Book of Job gives us a relatable example of a man questioning God. God calls Job righteous and says there is no one like him on the face of the earth [Job 1:8] which is some compliment. However, God then permits Satan to plunder Job’s wealth and kill all 10 of Job’s children. In a short space of time, this man of God experiences unimaginable misery and calamity. We read his story with the full knowledge of chapters 1 and 2, so we know the “why” of Job’s predicament. Imagine what it must have been like for Job who was an upright man and yet, experienced unfathomable pain and loss because God permitted it.

Poor Job never knew the “why” of his plight. Being a man of faith, Job took his incredible misfortunes to God and essentially asked God: “what do you have to say for yourself?” I find it interesting that when God finally answered Job, God doesn’t tell him “why” it happened. Instead, God response was something like “do you know who I am?” or “do you know who you are talking to?” And Job’s response? He regretted everything he had said and repented in dust and ashes [Job 42:1-7]. What did Job understand, that we haven’t? Does God owe us an explanation?

I believe that when we really appreciate who we are in relation to God, how powerless and insignificant we truly are in comparison to the God of the universe, then we begin to understand what an amazing blessing it is that He is full of benevolence. The fact that we exist, can breathe, think and even have the right to obey or rebel against God is a gift. Imagine if you had God’s power and there were people out there shaking their fist at you, ignoring you and uttering all manner of blasphemies against you. What would you do with them?

Would you instead of compelling your subjects to do as you say, choose to disguise yourself as one of them so that you could love and teach them to live right? Wouldn’t you compel them to obey you instead? Imagine you had to watch them torture, spit at and whip your only Son, who was immeasurably more upright that Job, to within an inch of His life. Then watch them nail Him stark naked to a cross to die slowly and painfully while being mocked. Would you show the level of restraint God showed? You certainly wouldn’t keep trying to win their love and trust. In fact, chances are you would wipe them off the face of the earth and call it a day.

Imagine a God who sees everything you think, say and do, who sees every time you disobey His Word and still loves you infinitely. He could, if He wanted to, annihilate you and there’s nothing you could about it. The Bible also refers to us as unworthy servants [Luke 17:7-10] and honestly, I feel this is a more accurate description of me. I may have a case to make for expecting God’s benevolence if I obeyed Him perfectly but I haven’t. Chances are you haven’t either. I am even more grateful that God doesn’t judge me based on my own uprightness because I simply wouldn’t stand a chance.

The truth is that as subjects we often fail our King. Our sins should earn His wrath, instead, He showers us with His grace. He tolerates our questions and understands when we are disappointed with Him, not just because He knows what it’s like to be human but also because He loves us. He gives us free will which we often use to reject Him and His Word. He gave us intellect, so that of all His creation, we could know Him, and yet, often we use the same intellect to try to disprove His existence.

Often we interpret God’s goodness against the backdrop of our present circumstances. Yet, if we look beyond ourselves, we may just realise how much we have to be thankful for. For instance, His sun shines and His rain pours out on both the good and evil person [Matthew 5:45]. The Bible ends with Jesus inaugurating His everlasting government after destroying sin, suffering and death [Revelation 21-22]. It will be a government, unlike anything we have ever seen in which justice, peace and love will reign. I get the sense that only then will we truly understand just how good God is.

In the interim, those of us who have chosen to be God’s subjects in a world rebelling against Him need to embody His goodness and reflect it to others. That’s one of our primary tasks as His subjects.

Our God is Good, and there’s nothing to compare with His Goodness. The Psalmist says “What is man that You are mindful of him, And the son of man that You visit him?”
‭‭Psalms‬ ‭8:4. But we thank God for His Love, Mercy and Grace for mankind.

What are you doing with your talent?

My ways are not your ways