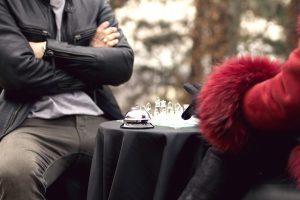 Have you ever felt like God has led you down a dead-end? You have earnestly tried to follow God and life doesn’t seem to be unfolding as you expected? I often think of the Israelites on the shores of the Red sea. God led them there in a pillar of cloud by day and a pillar of fire by night [Exodus 13:21-22]. Yet, they panicked when they got to the Red sea because for a moment, they were trapped between the imminent danger of the advancing Egyptian army and the sea. They were helpless and terrified, and they cried out to God [Exodus 14:10-14]. Some of us have experienced the helplessness and fear the Israelites felt despite trying to follow God and we have also cried out “I trusted You Lord, where are you?”

I am grateful that I can turn to the Bible and find a man whose life didn’t initially go to plan. Joseph, the great-grandson of Abraham, had multiple inspired dreams about rising to a position of power and honour [Genesis 37:7]. However, life didn’t go as he expected. First, his brothers out of jealousy conspired to sell him as a slave to travelling merchants. The merchants subsequently sold him in Egypt to one of Pharaoh’s guards. His head didn’t drop, he went about his duties with integrity and he was eventually put in charge of his master’s household [Genesis 39:1-6].

Just as things were beginning to look up for Joseph, his master’s wife tried to seduce him. When he declined her advances, she framed him on a bogus attempted rape charge and Joseph was thrown in jail [Genesis 39:7-20]. While it is not explicitly mentioned, you can imagine that Joseph would have thought “what is going on Lord? This isn’t what You promised”. We find Joseph lamenting his plight to one of the prisoners he was trying to help [Genesis 39:15] because he was experiencing the unfairness of life when God had promised him something different.

In recent weeks, I have written about testing, taking a leap of faith and some of our struggles with the Christian life. Regularly, we are confronted with situations and decisions, some quite unexpected, which force us to choose either to trust God or not. I freely admit that trusting God isn’t easy. I often wonder how I would have responded in Joseph’s situation, would I trust or give up on God? Would I have trusted in God’s deliverance if I was one of the Israelites stranded on the banks of the Red sea or become despondent? How do I respond to the challenges and uncertainties of life I experience today?

These days, I am trying to change my perspective as I face difficulties and trials. I do so by repeatedly asking myself: “how big is your God?” Isaiah says that God measures all the waters of the earth in the hollow of His hand and maps out the universe with the span of His hand [Isaiah 40:12]. This is a picture of a God who has absolute control over His creation. Zechariah also says that as a child of God, I am the apple of His eye [Zechariah 2:8], which means I am very dear to God. This God has promised to make all the situations I will ever face work out in my favour [Romans 8:28]. I just have to constantly remind myself that this God fights my battles and walks me through tough times. Essentially, God has rigged life in my favour, so I cannot lose.

The challenge arises when we feel cornered and life isn’t unfolding as we expected. I must confess that sometimes when the situation feels irredeemable and everything is spinning out of control, I tend to default to my perspective and fear, rather than faith takes hold of me. Yet, from God’s perspective, my assessment couldn’t be further from the truth. Nothing is irredeemable to God. Imagine a grandmaster playing a novice at chess. Though at times, it may even seem as if the novice has the upper hand, a few moves down the line, it becomes evident that it was all part of the grandmaster’s plan to allow the novice the illusion of the upper hand. The grandmaster’s win is never in doubt.

God is like that grandmaster, but much greater and always in control. He set up Pharoah and his army because He wanted to display His might to the Egyptians [Genesis 14:3-5]. For a moment, Pharaoh thought he had the upper hand, but God created a path for His people through the Red sea and resoundingly defeated Pharaoh and his army [Exodus 14:15-30]. God also used a story that involved human trafficking, exile, slavery and unjust imprisonment to get Joseph to a position and power and honour [Genesis 41]. Joseph would later say to his brothers, what you meant for evil, God used for good [Genesis 50:20]. It didn’t look that way for a while as the circumstances unfolded but God always knew what He was doing. As King David puts it: “all the days ordained for me were written in your book before one of them came to be” [Psalm 139:16 NIV].

God hasn’t changed, if you have made Him Master of your life, then He is at work regardless of how challenging or hopeless your situation may seem. Maybe like me, you may want to practice imagining your situation from God’s perspective. The truth is our human perspective often puts our situation between God and us while a divine perspective will put God between us and the situation. The latter usually results in us having peace that surpasses human understanding irrespective of the situation [Philippians 4:7].


What a great inspiration and encouragement.

“And He said to me, “My grace is sufficient for you, for My strength is made perfect in weakness.”
‭‭II Corinthians‬ ‭12:9‬ ‭