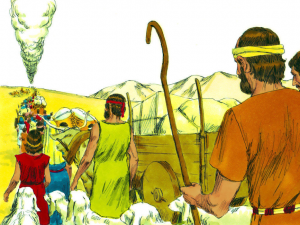 You have probably heard the expression “seeing is believing”. This implies that what we see informs what we believe and sight is a necessary component of faith. Following this line of thinking, there are those who say “I can’t believe in God because I can’t see Him. When I can see God, I will believe in Him”. The Bible even records Thomas, one of Jesus’ disciples, saying something similar when he was told that Jesus had risen from the dead [John 20:24-25]. Interestingly, there was a time, centuries before Thomas was born, when it would have been ludicrous to doubt the existence of God. In that time, if someone was to say “prove to me that God exists”, you could simply take him or her outside your tent and show them a strange cloud hovering overhead in the daytime or the pillar of fire at night [Exodus 13:21-22]. You could regale such a person with eyewitness accounts of the awful plagues God unleashed on the Egyptians. You could point to mount Sinai bellowing with smoke as it shook [Exodus 19:18]. And so on.

The bible is a very honest book because you would expect that with such daily, incontrovertible proofs of God’s existence and power, the faith of God’s people would have been at its greatest. However, this wasn’t the case. It took 6-7 weeks for the Israelites to travel from Egypt to Sinai where they spent about a year in God’s presence and were given the law. In that time, amongst other events, they had witnessed the plagues in Egypt, saw God annihilate the Egyptian army and defeated the Amalekites. No one could doubt God was with them. Yet, 11 days after leaving Sinai, disaster struck as they went through a costly crisis of faith as they reached Canaan.

Upon reaching the outskirts of Canaan, Moses had sent 12 spies (one from each tribe) to survey the promised land [Numbers 13:16-20]. The spies came back and confirmed the fruitfulness of the land [Numbers 13:27]. But 10 of the spies also reported that the inhabitants of the land were much bigger and stronger than they were and Israel would not be able to take the land [Numbers 13:28-29, 31-33]. The other 2 spies tried futilely to remind the people that it was God who had promised to give them this land and He would keep His word [Numbers 14:6-9]. The people believed the 10, grumbled against Moses for their plight and even tried to remove him as their leader [Numbers 14:1-5].

Whenever I read the history of Israel in the first part of the old testament, I usually ask myself “how?!”. How could they so easily doubt God? How could they have forgotten all they had seen? How could this nation so readily embrace idolatry [Exodus 32]? Did they think that God did not know what He was doing? If God could squash the Egyptian army, the most powerful army of the day, would the Canaanites be too much for Him? But I am quickly reminded of my own unbelief too. I have God’s written word and promises but how often do I doubt them? How quickly do I forget all that God has brought me through when I encounter a seemingly insurmountable obstacle? How often do I forget that nothing is impossible for God? [Matthew 19:26]. How often do I trust what I see before me over God’s word when the chips are down? How often do I base my actions on my present circumstance even when they are contrary to God’s word? Am I any different from those Israelites who doubted God?

Paul tells us that these accounts were written down for our instruction [Romans 15:4]. Therefore, it is wise to learn from what the scriptures tell us. I see at least two instructions in the account of Israel’s journey from Egypt to the promised land. First, sight does not necessarily bring about faith. If ever a people had proof of God’s presence and might, it was the Israelites delivered from slavery. Yet their story is littered with grumbling and unbelief. The Bible tells us to walk by faith and not by sight [2 Corinthians 5:7] because faith is about trusting God and what He says [Romans 10:17] regardless of what you see. The other lesson is that unbelief has a price. It is estimated that over 2 million Israelites made the journey from Egypt to the brink of Canaan, but of that number, only two adults (the believing spies) made it into Canaan. This was because God punished them for their unbelief. Before they could finally enter Canaan, God made the Israelites wander in the wilderness for about 40 years until everyone 20 years and older had died [Numbers 14:21-23, 27-35]. Unbelief can derail God’s plan for us and rob us of our inheritance.

As Christians, we are called to heed this lesson. To live our lives in such a way that reflects the fact there is a far greater reality beyond what we see. God’s sovereignty means He is never surprised by the circumstances we find ourselves even when we are. It pleases Him when we demonstrate faith in those circumstance [Hebrews 11:6] and He blesses us when we walk by faith [John 20:29].

What a reminder that our walk with God is not based by what we see but by faith. We can all so easily forget that His words never fail neither does it change. I suppose we must hold on to His Grace to keep us grounded in faith no matter how tough life may get. God help us all stay in faith🙏🏽

We can only walk by faith and not by sight (our circumstances) if we live daily in His words. May our eyes of understanding be opened Amen.

What informs your thinking?

What is your Egypt?