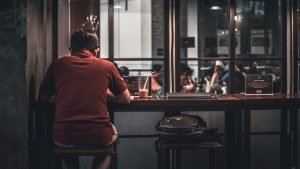 On the 14th of December, 1999, a cold winter evening, I landed at Heathrow terminal 3. Six hours earlier, I had left behind friends and family to emigrate to England. I had left behind the comfort of the familiar and plough straight into the unknown. Although I was born in London, my parents emigrated to Nigeria when I was still a baby so all I knew about England was the stories I had heard and the pictures I had seen. Up until that point, I had never travelled outside Nigeria. I had with me $5 (yes, dollars) given to me by a benevolent uncle and a suitcase full of clothes, ill-suited for the winter that awaited me. This was a somewhat reluctant transition for me, although England seemingly offered a brighter future, I was very much happy with my life back in Nigeria.

I will forever remain grateful to my mother who came 6 months earlier to earn some money for my brother and me to make the transition. She babysat during the day and worked as a nurse at night. This meant my brother and I had a bedsit when we arrived. She would be leaving in 6 weeks which meant we would have to be able to afford rent and food after she’d gone. So, the very next day, we were both registered at our local jobcentre. I applied for as many jobs as I could, I remember walking into every store on Oxford Street asking for a job. Five weeks in neither of us had a job and panic began to set in. We tried to register for a council flat and we were told that we were not a priority. Understandably, mothers with children and women were higher up the list than my brother and I. Being homeless was a real possibility for both of us but as God would have it, we both found jobs the week my mother flew back home.

It is not easy when you are foreigner, amongst other things, the culture is foreign. For instance, where I grew up, you greeted everyone you passed by on the street. It was a shock to the system when I did that here and people would just stare at me. Then there was my accent which limited my chances of getting a job. I had no qualification to show, no UK reference of any sort, therefore prospective employers were not so keen. Somehow, I wasn’t quite expecting to feel like an outsider amongst other Christians but on Christmas Day, I hit a low point. I went to church as I did back home and in church, people were sat with their families, I sat on my own and barely anyone spoke to me. I felt like an outsider amongst God’s people and I felt it didn’t matter to anyone whether I was there or not.  That was a tough, lonely day at church. It was easier to deal with being an outsider on the streets than it was feeling like an outsider amongst Christians.

The very first Christmas bore little resemblance to what we celebrate today. At the time of Jesus’s birth, His homeland was under Roman rule and the then emperor, Caesar Augustus had decreed a census for his entire empire. Therefore, everyone had to go back to his or her home town to be registered. This meant for Joseph, whose fiancée Mary was at least 8 months pregnant, they had to make the 90-100 miles journey from Nazareth to Bethlehem. There is no comfortable way for a woman that pregnant to travel, so it must have been a difficult journey for all involved. Upon arriving in his hometown, he could not find a house for his fiancée to give birth. Could it have been because the word had reached his hometown that his fiancée was pregnant outside wedlock, something that would embarrass the family? Or the fact that the child was not his? It took a divine intervention and a giant leap of faith for Joseph to proceed with the marriage after he found out Mary was pregnant. It is fair to say a few people did not believe the immaculate conception story. Whatever the reason, the fact remains not a single home or place of business in Bethlehem could make room for this family. The best they could get was a stable. What a tough, lonely experience that must have been for them. Nothing like what I experienced. At least, I felt like an outsider in a foreign land, they were outcast in their homeland. Moreover, I didn’t have a pregnant wife to worry about.

I am baffled by the fact that Jesus, the only person in history who could choose the conditions of His birth, chose the appalling (at least by human standards) experience recorded in the gospels of Matthew and Luke. However, as Christians, there is a message there for us to explore. How aware are we of the outsiders or the lonely people around us? How do we treat the ‘outcasts’ around us? How would we have treated Joseph and Mary? Would we have slammed the door in their faces and said ‘we don’t want your kind here!’? Would we have offered them the stable in the yard rather than a room in our home? I wrote about human kindness a few weeks ago, while this is needed at all times, it is particularly needed during this season because Christmas exaggerates the feelings of loneliness when you are on your own.

Centuries before the very first Christmas, the prophet Isaiah uttered these words: “therefore the Lord himself will give you a sign: The virgin will conceive and give birth to a son, and will call him Immanuel [Isaiah 7:14]”. He goes a step further to tell us that Immanuel means “God with us”. In a very literal sense, God walked amongst us (human beings). Then when Jesus left this earth, He gave us the Holy Spirit as His abiding presence so that we are never alone [John 14:17-18]. Therefore, as God’s children, our Christmas message to the world is that God became a human being because loves us. He wants to be with us always so invites us to be a part of His family, regardless of our background.  So, as we celebrate in this season, let us remember to make room for others especially the outsider and the lonely because, in our Father’s kingdom, there is room for everyone [John 14:2].

What diet are you on?