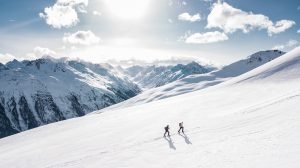 One of my desires is to be truly understood. There are times when I try to explain how I am feeling or what I am going through to another person but the words are not quite there. I think this is something many people go through and there is a sense of frustration when no one seems to get you. A similar thing happens when we are going through a particular season of life, we try to seek out people who have been there because they get it. Such a person will hopefully understand you, they will be able to complete your sentences. There is a kinship that comes from having been through a similar experience and often, their experience offers you hope. If you know that someone else has been through what you are going through and survived, it gives you hope and the extra push to make it through that season.

Hebrews chapter 4 tells us that Jesus was like us in all things but sin. This is a very reassuring statement for us Christians. Reflecting on my own walk, I can sometimes treat Jesus as though He is very far removed from the human condition, He doesn’t get it. This tends to be most evident in prayer. I sometimes pray using a formula as though He was a genie. I tend to start with my ‘thank you’, then say ‘sorry’ and then make a ‘request’. There is nothing wrong with that formula for prayer, it is a good way to teach children to pray. But imagine if you had a friend and your conversations were formulaic and always took the same pattern, at some point, you would probably say to him or her “tell me how you really feel”, “speak from your heart and not your head”.

One of the lessons I take from Job is the fact that he didn’t hold back. He told God exactly how he felt. He spoke from his heart. What he went through seemed unjust and undeserved to him and he told God so. He questioned the fairness of God when life dealt him an incredibly unfair hand. To his friends, it was as if Job was blaspheming and they reprimanded Job for it (if I am honest, I too would have reprimanded him). However, at the end of the book, God reprimands the friends for not saying what was right about Him as Job did. This tells me that God can take me pouring out my heart to Him, telling Him as I really feel or just sitting quietly in His presence knowing that He gets me. In one sense, God’s answer to the human condition was to send His Son to experience it. In Jesus, no longer is the human condition alien to God, He took on flesh and experienced what is like to be one of us.

One of the things I often forget about Jesus is that He was and is a man. It is easy to see Him as God and He is. The first chapter of Hebrews expounds on His deity. In there, we are told that Jesus is the heir of all things…and it was through Him that God made the universe. We are also told that He is the radiance of God’s glory and the exact representation of his being, sustaining all things by his powerful word, [Hebrews 1:2-3 NIV]. However, just as important to me is humanity because being like us in all things means He went through the human condition. He understands what it is like to be a human being. He gets it. He gets when I am down because of the season in my life. He gets when I am elated. He gets when I am lonely. He gets when I am misunderstood by those closest to me. He gets when I am overjoyed. He gets what it is like to feel forsaken by God, He gets what it is like to experience shame, pain and suffering. Therefore, there is nothing I can go through that He cannot relate to. Crucially, He went through everything I can possibly go through without sinning. This means, he has triumphed over all that life could throw at Him. He did so facing the same temptations I face but never yielding to temptation. Furthermore, not only was Jesus victorious in life, He took on death and won. In rising from the dead, He proved that neither the situations and temptations of life nor the grave could overcome Him.

Imagine you are to climb Everest for the first time. It takes 2 to 3 weeks to reach the summit if you are taking the easiest route. It is a treacherous climb and it will push you to your physical and emotional limit. Would you go it alone or would you take a guide? Would you take the guide who has read about climbing Everest in a book or would you take with you someone who has been through the experience of climbing the mountain, who knows the way to the summit and can lead you there? Obviously, you would go with the experienced climber. While that analogy is limited and does not fully capture the essence of the Christian walk and being a disciple of Jesus, it does in some way make Jesus more relatable for me. He knows what it’s like. Additionally, Jesus doesn’t just guide, He is also able to renew your strength…so that you neither grow weary not faint [Isaiah 40:31].

Today, Jesus holds out an invitation to you and I. He says to us: I’ve been there. Pain? He experienced the pain of being betrayed by one friend and denied by another. Insults? He was mocked as an illegitimate child. Suffering and shame? He hung stark naked on a cross after being tortured and crucified unjustly. Desolation? He felt forsaken by His Father. Temptation? He knows all about it. Sadness and sorrow? He wept bitterly at the death of a friend. Dread in anticipation of a tough trial? He had that too. He knows what it is to work hard to earn a living, He even understands what it is like when something goes wrong at a party and you are a step away from embarrassment. He knows what it is like when those around you question your judgement and you are absolutely certain of yourself. He knows how to empathise with you rather than tell you off for feeling despondent. Quite literally, He gets you, He completely understands what you are going through.

We don’t have to ascend our Everest on our own. In Jesus, we have a guide who has already conquered our Everest and can lead us to conquer it. He has promised not to abandon us on the way and He offers an even better promise for when we face our last, inevitable enemy: death. He promises that He will not only be with us through it all in this life but when we breathe our last, He will be on the other side to welcome us into an unimaginably better life than this one. The reason we can hang everything on Him and His promises is quite simple: He has been there, done that!

As I reflect on my life, I am convinced that my greatest deficiency is not truly knowing, comprehending and believing how God […]

I rarely write about healing. It’s probably because I have a logical mind and I gravitate to logically consistent things. Miracles, especially […]


Thank you for another encouraging message. More anointing.
My prayer is God will continue to give us Grace to cast our cares on Him, knowing fully that when we do so He will sustain us; and we will never be shaken.
‭‭

Lessons from the AA

And what about him?