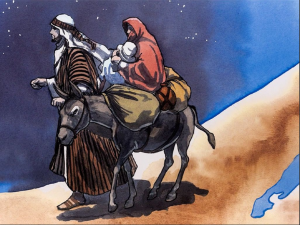 Yesterday was the last of the 12 days of Christmas. In the Christian world, the last day of Christmas is called the Epiphany. It is a commemoration of the Magi finally finding the new-born King, Jesus. Matthew’s gospel tells us that the Magi were wise men (astrologers) from the East, who had followed a star to Jerusalem. Their journey is likely to have been a long one because many believe the “East” refers to the ancient Persian empire, modern-day Iran. Iran is about 2300km from Jerusalem. The star they were following was prophesied by Balaam centuries earlier (Number 24:17) and was to indicate the birth of the promised Messiah [Micah 5:2].

Nevertheless, they did not know the precise location of the place the child would be born. So, when they arrived in Jerusalem, they went to the king to find out if he knew. Herod, the king not knowing, called together the priests and scribes who told him about Micah’s prophecy and confirmed that the child would be born in Bethlehem, in Judah [Matthew 2:3-6). Herod, a renowned tyrant, did not like the idea of a new king, so he hatched a plan to kill the child. He told the wise men to come back to him when they had found the Child. However, the wise men were divinely warned in a dream not to go back to Herod [Matthew 2:12]. And they didn’t.

When Herod realised what had happened, he went on a murderous rampage which had been prophesied centuries earlier [Jeremiah 31:15]. He ordered the killing of all male children under 2 years old in Bethlehem in a bid to kill Jesus. However, an angel had warned Joseph before the killing spree to take the child and escape to Egypt because Herod was looking to kill Him [Matthew 2:13-14].  These series of events led to Jesus and His family seeking refuge in Eygpt until Herod died. This is a very modern story. So many in the world are fleeing from their homeland and seeking refuge in foreign lands because their lives are in danger. Like Jesus, they may be fleeing to places where the language, religion and culture are different. Like Jesus, most of them are poor and in need of kindness and hospitality.

Crises in Syria, Afghanistan, Somalia, Myanmar and South Sudan have forced tens of millions to flee their homes in recent times. I am not a politician and I do not claim to understand the intricacies of foreign policies and managing the immigration crises we see today. There are many important factors to consider especially with illegal immigration. Resources are finite and there is the threat of terrorism, etc. However, any decisions made need to be made with compassion and not fear because fear is not of God [2 Timothy 1:7]. We also know how God feels about refugees because His own Son was a refugee for a time in His life. Long before Jesus was born, Moses wrote: “He (God) executes justice for the orphan and the widow, and shows His love for the stranger (resident alien, foreigner) by giving him food and clothing. Therefore, show your love for the stranger, for you were strangers in the land of Egypt”[Deuteronomy 10:18-19 AMP]. A message that is very much applicable today. Also, see Leviticus 19:33-34.

Jesus on numerous occasions relied on human kindness. At his birth, He had to be born in a stable amongst the animals because no one would give His parents a decent place to give birth to Him [Luke 2:7]. As we have seen, He was a refugee in Egypt. Additionally, when He started His preaching ministry, He was homeless [Luke 9:58, Matthew 8:20]. Even after He died, He had to be buried in a borrowed tomb [Matthew 27:59-60]. As the only person in history who could choose exactly what life He wanted, Jesus could have chosen to be rich. Instead, He chose to be poor and to rely on the compassion of others. Therefore, as Christians, we must take seriously the last parable He told before His death. In that parable, Jesus tells us that when He seats to judge the nations at His return, He will separate the people into two groups. Those who showed love, generosity and kindness on His right and those who lacked these qualities on the other hand [Matthew 25:31-33]. He will say to those on His right “…‘come, you who are blessed by my Father; take your inheritance, the kingdom prepared for you since the creation of the world. For I was hungry and you gave me something to eat, I was thirsty and you gave me something to drink, I was a stranger and you invited me in, I needed clothes and you clothed me, I was sick and you looked after me, I was in prison and you came to visit me.”[Matthew 25:34-36 NIV]. But He will also reject those on His left [Matthew 25:41-45].

Jesus knew that the world He left behind would include the poor, the orphan and the needy. He identified with these people and experienced what they go through. He said in that parable:” ‘…truly I tell you, whatever you did for one of the least of these brothers and sisters of mine, you did for me.’” [Matthew 25:40 NIV]. You and I, as Christians, are called to see Jesus in the people who need our help and to treat them as we would Jesus. Sadly, in this broken world, there is no shortage of those in need of our help and compassion. So, as we encounter them, we must ask ourselves, how would Jesus want me to respond?

Thanks for the reminder, Charles.

How is your time with God?

What informs your thinking?