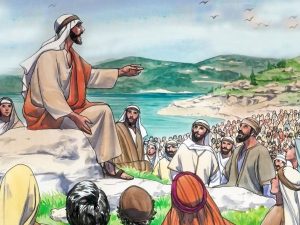 Two years ago, a friend persuaded me to start blogging notes I had made during my personal Bible studies. I was reluctant to share my faith publicly in such a medium because being vulnerable and putting myself out there wasn’t something I was eager to do. Talking about my faith in the public domain could lead to scrutiny and those who know me could point to my failings. Someone once told me that “Jesus is compelling and costly”. I have found that statement to be true. The closer I move to Jesus, the more it costs me. I find that there are no half-measures, you can’t be lukewarm in your pursuit of Jesus [Revelation 3:15-16]. Jesus doesn’t want a part of my life; He wants ALL of my life. I must surrender every single aspect of my life to Him.

That’s a scary place because surrendering to Jesus implies relinquishing control of my own life. That’s not something many of us do willingly. Imagine those who heard Jesus teach 2000 years ago. What must it have been like for them to hear words like: “If anyone comes to me and does not hate father and mother, wife and children, brothers and sisters—yes, even their own life—such a person cannot be my disciple”? [Luke 14:26 NIV]. Jesus made this statement surrounded by a crowd. Closest to Him would have been The Twelve and other disciples who were willing to surrender their lives to Him. Beyond that were people probably curious about Him, observing from a safe distance. Some of them probably wanted something from Jesus but were reluctant to surrender their lives to Him and become His disciples.

I do wonder which group I would have belonged to if I was present in the crowd. Jesus didn’t mince His words about the cost of following Him. He made it clear that coming closer would cost you. Would I have chosen to observe at a safe distance from my comfort zone? Would you? Before you answer, take a closer look at your life right now. Jesus isn’t unintrusive. He’s quite the opposite. He wants to dethrone and replace whatever is at the centre of your life. But He will only do that at your behest if you lean in and move closer to Him. He will not share your heart with another master [Matthew 6:24].

Are you holding back from Jesus? What is keeping you from moving closer? Is it what people will say? Is it what you’ll have to give up? Is it the fear of relinquishing control of your life? Could it be that deep down you don’t believe who Jesus says He is or you haven’t given it much thought? Our hearts reveal our deepest desires [Matthew 6:21] and points to the source of our identity and security. For as long as our deepest desire is something else like marriage, children, job, money, power, fame, and so on, it isn’t Jesus. The truth is that those things become counterfeit gods for us, they never satisfy our deepest longings and they become traps for anyone who trusts in them [Proverbs 29:25].

On a cautionary note, the closer you get to Jesus, the more you have to die to yourself. This is a struggle for many of us because being a disciple means replacing self-determination with surrendering to the will of God. It also means replacing self-indulgence with a life of service to God and others. In our self-centred culture, these are absurd ideas and some might say that living this way is wasting one’s life. But, is that true? Are the counterfeit gods which invariably become our masters and determine what we do with our lives better than Jesus? Abraham was the first person to call God “Adonai” which means “Lord and Master”. As a man who had servants, Abraham understood what it meant to come under another’s Lordship. As he yielded his life to God, giving up the life he knew, God honoured him far beyond his wildest dreams. Jesus promises to do far more for us than we could ever do for ourselves but we have to lean in, move closer and surrender our lives to Him first. Are you doing this? Can you truly call Him, “Adonai” or is another your master?

This is my 100th blog post. My life is drastically different from where it was when I posted my first blog on spiritual inertia. Then I wrote about overcoming the reluctance to step up and do something for God. Back then, I couldn’t envisage the journey I’m currently on. While it has cost me a lot already, God has rewarded me with peace, confidence and security nothing else could give me. I still battle counterfeit gods and sometimes hold back because of my imperfections. However, I am still pushing forward to get closer to Jesus. I am finding out just as Abraham did, that Jesus is the best possible Lord and Master. He is trying to save me from myself and counterfeit gods. He is giving me far more than I could ever give myself. It’s been a tough journey but I have no regrets.

It occurred to me a while ago that Jesus is either who He says He is or He isn’t. If He isn’t God, then He isn’t worth a minute of my time but if He is who He claims to be, then He is worth my life. There is no middle ground and I had to find out. The only way to do that was to move closer and lean in. If deep within you know you are a curious observer in the crowd, still unwilling to completely surrender your life to Jesus, what is holding you back?

The freedom of not knowing