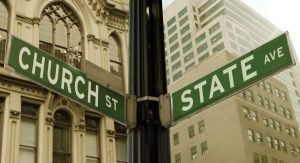 God’s commission to Israel after liberating them from the bondage in Egypt was to go and show the rest of the world how God’s people live. They were to live God’s way, set apart from the pagan cultures around them and they were given instructions by God through Moses on how to do this. If His people lived His way, the fruits of that obedience would be seen by the watching world. As such, the Promised Land was situated where Israel could be observed by the nations around them. If they lived God’s way, they would be blessed and if they didn’t, the consequences set forward by God would ensue. Either way, the nations around them would witness the result.

In the New Testament, Jesus comes bringing forth the kingdom of God which is here but not yet [Hebrews 2:8-9] and His lordship. Now, God’s people are called to be citizens of that new kingdom and to live out its values as we bring the Gospel of Jesus to the State (world) [John 17:14-16]. Also, in the New Testament, the political context changed for Israel. They were no longer an independent State but subjects of the Roman Empire. The government of the day did not know God and the laws of the State were not given by God. It is within this context that the New Testament is written. Throughout the New Testament, the Early Christians are a minority in the State with little or no political clout. However, their lives bore witness to God very visibly, convicting the pagan culture around them.

Today, we can get Church and State mixed up especially when Christians are in the majority. When this happens, Christians in the political class may attempt to use God’s word to legislate within the State. The truth is that you cannot force non-Christians to adhere to Christian values or ethics if they do not know Jesus. This is futile. Moreover, God’s standard is significantly higher than man’s, therefore we are all certain to fall short. If this is so, how does the non-Christian handle this without grace? The State will not have the answer.

So how do God’s people bring about lasting change in the State? This is obviously not done by forcing those who are not God’s people to live by Christian values or ethics. To start with, we must speak out against injustice, immorality, greed, oppression and so on. However, I believe we cause real change by living in submission to God’s word first. When we live God-honouring lives, there will be fruits which will convict the people around us and force a response from them. They will want to know why you are different, why you don’t respond as they do to challenges of life. Why you are joyful in the face of suffering, why you forgive those who wrong you instead of taking revenge, why you visit the sick and prisoners, feed the hungry and so on. This will allow us to share Jesus and do our bit to increase the kingdom of God. We are warned however that because the world hated Jesus, we who follow Him, will also be hated [John 15:18-25]. As such, we might get persecuted. Are you prepared for these responses?

What is certain is that if our lives do not mirror the Gospel we profess, there will be no appreciable difference between us and the world around us. The world will see through the hypocrisy if we try to tell them how they ought to live. In a sense, we have to take the log out of our eyes (because Christians should know better) before trying to take the splinter out of another’s eye. The State definitely needs godly Christians in government and in positions of influence, however, those Christians and the rest of us, need to live lives which are above reproach first. Once we do that, we can use whatever platform God has given us more powerfully [see an example in Daniel 6].

God calls His people to be holy (set apart, different). He has given us the vocation to steward His creation, to be salt and light. We are to express our vocation as we live within the State influencing not by coercion, but by works of charity, doing our civic duties and the way we live our lives. Since God’s standard is always higher than that of the State, we ought to act more like the conscience of the State, challenging the world around us in a better way. So, whether building a wall or leaving a coalition, God’s people are challenging the State to look out for the poor, the orphan, the needy and so on. Each of us should be the voice for the voiceless, lead the way in social justice and be the hands and feet of Jesus in redressing the wrongs we see.

Is everyone welcome in your church?