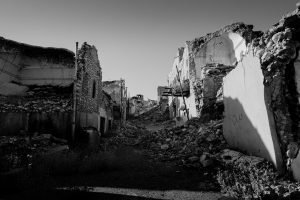 I was watching the news one evening last week and a news report came up about the conflict in Syria. It showed deserted war-torn streets where several houses had been reduced to rubble. The news anchor mentioned that several thousand people had been killed and an even greater number had fled their homes because of the conflict. A thought occurred me as I watched on: “what if someone in the middle of that conflict stumbled upon the blog I’ve posted about God’s goodness, what would they make of it? What if they reached out to me and recounted their plight, what would I say to them?”

I am one of a declining number of people who haven’t experienced war or the aftermath of war and I am grateful. But I think of a father who has to protect his wife and children in a warzone. Apart from safety, food and water if available will be at a premium, not to mention shelter and clothing. Such a person can’t look beyond survival and rightly so. However, the Bible tells me that this man and his family are just as precious to God as I am. Just as God has a plan for my life, He has a plan for this man and everyone in His family but how does that plan manifest in this man’s situation?

How would I speak to this father and his family about God’s goodness when his daily experience is the worst life can throw at him? How could I convince him that a loving God runs the universe and cares about his plight? How do I tell him that God not only has the power to end the conflict that has blighted his life and rob his children of a future in their homeland, but this God can restore his fortunes as well? How do I give this man and his family hope?

I can’t relate to his situation and I don’t presume to have the answers but my mind hacks back to first-century Palestine. Imagine that your country has been invaded by a foreign nation. You barely have rights and you are forced to pay exorbitant taxes which leave you with very little, no matter how hard you work. Foreign soldiers are stationed on your street and these soldiers treat you with contempt, as though you were a second-rate human being. They force you into manual labour for them and you could be whipped to within an inch of your life for looking in their direction.

Life is hard and miserable most days but one day, a friend tells you that the preacher talking to a crowd just over the hill from where you live if the Messiah. You have long given up on any Messiah but you know the stories. Many centuries ago, God had promised to send a Messiah who would restore your nation to its zenith, when it was the envy of its neighbours. Curiosity gets the better of you and you decide to go and see this Messiah. Just as you are wondering to yourself how the Messiah is going to liberate your homeland without an army of His own, you hear what He is saying.“…if anyone slaps you on one cheek, turn the other cheek…if anyone asks you to carry his load one mile, go two miles…if anyone asks you for your shirt, give him your coat too…love your enemies…pray for those who persecute you…” Your mind immediately flashes back to your last encounter with one of the foreign soldier, the lashes from his whip are still raw.

You can understand why many struggled to accept what Jesus taught. Jesus could have crushed the Roman empire with a word and end their occupation of Israel but He didn’t. Instead, He preached a message that many Jews would have understandably found difficult to receive. I find the Sermon on a mount a tough listen too and I can’t even relate to the experience of the first hearers or someone going through something similar today. I wonder if you feel the same.

No matter how often I read God say: “…My ways are not your ways…” [Isaiah 55:8-9], I find it difficult to accept but God said it to His people distraught in exile. Also, why didn’t Jesus end the Roman occupation of Israel in His day? I am almost certain that father would ask me: “why doesn’t God put an end to this conflict?” or something to that effect.  I’m sure many in Jesus’ day asked the same question. I ask the same question when my circumstances seem to be suffocating me.

Jesus was well aware of what His people wanted and the difficulties they experienced on a daily basis. Yet, He preached a message that warned His followers not be consumed by bitterness, anger, hatred, malice, wickedness and so on because how we behave matters greatly to God. Whatever plan God has for us necessarily includes us behaving in a way that pleases Him, no matter our situation. Besides, the alternative never serves us well in the long run. Thankfully, Jesus did also teach that the hairs on our heads were numbered by God [Matthew 10:30]. That is to say, God cares for us and nothing that happens to us escapes His notice [Psalm 139: 7-12]

So, I guess I would tell that father what I tell myself; God is aware of what you’re going through and He cares about it. He eventually does right by everyone. He always settles the score and when He does, He will more than make up for anything we have been through in this life. As for you, however hard, whatever the situation, live right so that when God settles the score, you are right with Him.

Some powerful words and sincere and difficult questions. Thanks Charles for tackling this.
My favourite song currently is Rocks, Roads Anne Weeds by John Mark McMillan and has the following words:

Well, I’ve got no answers
For heartbreaks or cancers
But a Savior who suffers them with me

Thanks Andy, some poignant words there. Will give the song a listen!

That’s s a difficult one to understand, and we all struggle with it. As you mentioned, His ways are not our ways, that’s why He is God Almighty (Yahweh). But the comfort we have is, He’s right with us in our suffering.
“Seeing then that we have a great High Priest who has passed through the heavens, Jesus the Son of God, let us hold fast our confession. For we do not have a High Priest who cannot sympathize with our weaknesses, but was in all points tempted as we are, yet without sin. Let us therefore come boldly to the throne of grace, that we may obtain mercy and find grace to help in time of need.”
‭‭Hebrews‬ ‭4:14-16‬ ‭NKJV‬‬
https://www.bible.com/114/heb.4.14-16.nkjv