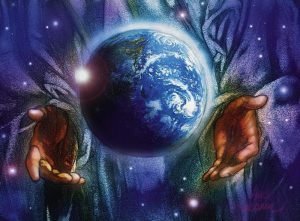 I was listening to a preacher teach on the book of Jonah. In his talk, he listed 3 worldviews which ponder the existence of God. There is the worldview that claims there is no God, that is, He did not create the world and He doesn’t control it. This is largely the atheist view. There is another worldview that claims there was a God, He created the world but He is no longer in control. This is largely the view of the deist. Then there is the biblical worldview that unequivocally claims that there is a God, He created the heavens and the earth, and He still controls it today.

The preacher used the events in Jonah to illustrate God’s sovereignty over His creation. When we think of Jonah, our minds immediately go Jonah in the whale but there are seven other miracles recorded in the story. They include the storm that God caused when Jonah tried to run away and the fact that the storm immediately subsided when Jonah was thrown off the boat [Jonah 1]. There was the plant that God commanded to grow overnight and the worm He commanded to eat its roots which killed it [Jonah 4].

I find that most Christians have no problems believing that Jesus turned water into wine [John 2] and raised Lazarus from the dead [John 11]. I am certainly one of them. However, when it comes to our personal circumstances, we sometimes doubt that God is in control of that too. This is manifested in worry and anxiety which Jesus expressly tell us to avoid [Matthew 6]. I must confess that my struggle isn’t usually wondering if God can do what I am asking for, I definitely believe He can. My struggle is will He? Or will I get a different answer?

The atheist and the deist might ask: if there is a God and He is in control, where is the evidence? Why isn’t God more obvious? But what would evidence of a sovereign God in control look like? Would He force us to do His will? Would He strike us down whenever we disobeyed Him? Would He control every single event on earth so that nothing bad could happen? Would there be signs of intelligent design in nature that echo the presence of a Creator? Would there be events that suggest divine providence in everyday life? How would God reveal Himself to us without violating our freedom to choose or reject Him? St. Paul tells us that what can be known of God has been made plain [Roman 1]. Ron Hansen puts it beautifully: “God gives us enough to seek Him and never enough to fully find Him, to do so would inhibit our freedom and our freedom is very dear to God.”

The Bible never suggests that God’s primary concern is for us to know that He is there. However, it does include stories like an entire nation of approximately 2 million people seeing regular supernatural expressions of God such as a pillar of fire by night and cloud by day [Exodus 13] or a trembling mountain suddenly covered with smoke [Exodus 19]. They also saw God’s presence descend on a temple [1 Kings 8]. However, this same nation repeatedly indulged in idolatry. In the days of Jesus, people saw a man who had been dead for 4 days raised back to life and sought to kill him to disprove the miracle. And my favourite, the soldiers who witnessed the resurrection of Jesus, took hush money and changed their story [Matthew 28]. Would any of these supernatural events have been sufficient evidence for you, because it wasn’t for most who witnessed them?

It seems evidence is secondary, and the greater issue is relinquishing our perceived control of life and submitting our will and desires to God. This is what faith requires. In any case, a close examination of life shows we are not in control and we live by certain rules we cannot change. We must all die, none of us can survive without oxygen or water, our bodies need rest, and so on. Science may be able to explain the how for these experiences, but the why is usually off limits for the big questions of life. So, the choices usually boil down to believe in a meaningless, random existence or look to a power greater than ourselves.

The biblical worldview tells us of a sovereign, all-knowing God of love who refuses to violate our free will. Instead, He calls out to us to submit to Him so that He can give us the best possible experience of life before and after death. As a Christian, my primary aim each day is to reject the fallacy of being in control and trust that the God who created me wants a relationship with me. He wants to express His immeasurable love for through that relationship. Meaning and purpose are rooted in Him and He wants the absolute best for me.

This God wants nothing from me except my trust and what He offers in return, I cannot do for myself. Can He actually be real? Well, there is more than enough evidence in the natural world to affirm His existence. Is He still in control now as He was when He made the heavens and the earth? It is very evident that you aren’t, so what do you have to lose by trusting God?