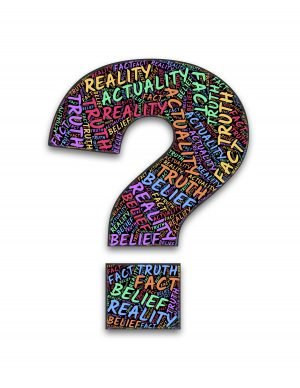 Let’s imagine you are in a large hall with an elephant. Would anything you do change the fact that there is an elephant in the hall with you? Wouldn’t it be silly to close your eyes and block your eyes and say, if I can’t see or hear the elephant, then there is no elephant? Intuitively, we all know that some things are either true or false and our opinions on the subject are irrelevant.

How about another analogy. Let say my neighbour tells me she saw a tiger in a field near my home. Obviously, tigers are not indigenous to the UK. So on the face of it, this story is preposterous but does that make her story false? What if there is a zoo near where I live with tigers? What if a tiger had escaped from that zoo? What if the helicopter I saw earlier was the police searching for the tiger? How about if what looked like puddles in the field look more like paw prints on closer inspection? Suddenly on examination of the available evidence, something that initially sounded highly improbable now seems plausible. Would it make sense to dismiss her story on the basis that it is highly unlikely without checking if there is any supporting evidence?

I relate these two analogies because I remember having a chat with a friend about astronomy. I said to him that the pictures from the Hubble telescope suggest that there is an intelligent design to the universe which would suggest an intelligent Designer. His response was ”…there is nothing out there, no God, nothing!”. I later thought to myself, how can you be certain? Have you carried out an objective evaluation of the evidence? Or are we dismissing the possibility of the existence of God because it seems incredulous to our minds?

A famous atheist was once asked how to respond to people who say there is a God and he said “mock them”. I find this response curious because it is a fulfilment of 2 Peter 3:3 but it is a response that simply assumes anyone who says there is a God is stupid and deserving of ridicule. It is interesting that some atheists rather than discuss the question of the existence of God choose to assume that the believer is wrong or delusional, ignore the question and then focus on the reasons the believer would think that. In our day, Experts have given emotional, psychological and even anthropological reasons why someone would believe in God.

However, I believe this all misses the point. Like the elephant in the room, whether God of the Bible exists or not is a true or false question. Our opinions or arguments on the matter are frankly, irrelevant. Furthermore, the answer has moral implications for all of us because if the Christian God exists then we are accountable to Him but if He doesn’t exist, well, there is no accountability to how we live and everything is permissible. The implied question is: “if you were accountable to a person superior to you, would you want to know?” or put differently, “if the God of the Bible is real, wouldn’t you want to know?”

Someone who was asked this question responded: “no I wouldn’t, because it may mean that I might have to change the way I live my life”. This is akin to the person who pretends the elephant is not there. Shutting our eyes, blocking our ears or dismissing the question doesn’t change a fact if it’s true. At some point, being in a room with an elephant is going to affect you whether or not you acknowledge the elephant’s existence. This is exactly where every human being stands in relationship to God. If the Christian claims are true, then there is a God who made all things and we will all have to stand before Him one day. It won’t be a choice nor will it be just those who believed in Him. That would be an awful day if you’ve ignored Him all your life.

Before that day, it seems to me that examining the evidence and making a decision about this God is a worthwhile endeavour. Most people accept that Alexander the Great existed. Yet, what we know of him comes from about 5 authors, none of whom met him. There is far more written about Jesus and most of the New Testament was written by people who knew and spent time with Jesus and their writings are corroborated by circular historians. As such, no serious historian argues anymore whether or not Jesus is a historical figure. However, the real question is who He was. Whether or not He is God as described in the Bible [Hebrew 1:1-3] is also a yes or no question with ramifications for all of us.

As a follower of Jesus, I recommend anyone honestly searching for answers to take a closer look at Him. My God is awesome, yet not scary. He is omnipotent but will give anything (and He did give His life) to have a relationship with you. He is a Lover who will stop at nothing to win you over if you let Him. If you can yield your life over to Him, He will give it back to you abundantly [John 10:10]. Ultimately, whether or not He is out there is not a matter of opinion. It is either a statement of fact or not and the answer has significant consequences. Blaise Pascal put it like this: “if  I believe in God and life after death and you do not, and if there is no God, we both lose when we die. However, if there is a God, you still lose and I gain everything.”

What do I do with my doubts?