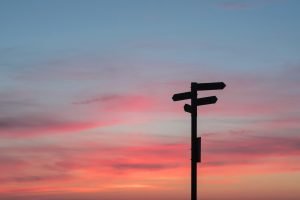 The Chambers dictionary defines ‘option’ as the freedom to make choices and the ability to make choices is one of our rights as human beings. My 2-year-old daughter reminds me of this fact almost on a daily basis. On her day, she is quite adamant about what she wants to wear. I once walked into a full-blown argument between her and my wife. She was determined to wear her pyjamas to church and wouldn’t budge. I watched this 2-year-old stand her ground with mummy, of course, mummy won in the end but it was a reminder that even at 2, there is something in us that wants to decide our fate. That said, at 2 years of age, we do generally do not have all the facts, nor are we best equipped to make wise decisions. However, with good parenting and a good upbringing, one would indeed hope that my grown daughter decides against wearing her pyjamas to church even though that will still remain an option to her!

As adults, if we are to make good choices, then we have to invest time in examining the options we have. Take choosing a place to live for example. Most people would spend time investigating the area, transport links, schools, proximity to work, etc. essentially doing your homework. This is not a decision you want to get wrong for a variety of reasons. Therefore, we do our research thoroughly. It is not a stretch to suggest that faith falls in the category of important life decisions. If the claims of Christianity are correct, then it is a decision that has ramifications for today and beyond death. This claim is either true or false, there is no neutrality. You could dismiss the claim as false and draw the line there but considering the magnitude of what is at stake, that does not seem wise. The other alternative would be to examine the basis of the claim thoroughly before deciding on whether the claim is true or false.

It is interesting to watch lawyers build a case. They start from interrogating the agreed-upon facts to determine the probable cause of events that would have led to the agreed-upon facts. Paul in his first letter to the Corinthians makes this bold statement:” … if Christ has not been raised (from the dead), our preaching is useless and so is your faith.” [1 Corinthians 15:14 NIV]. The Christian hope hinges entirely on the resurrection of Jesus confirming who He said He was, namely that He is the Son of God…the exact representation of God’s being [Hebrews 1:3]. This is important because Jesus made some very bold claims and promises that no human being could keep. So quite simply if He is not God and merely a man, then Christianity is pointless but if He is God, all-powerful and almighty, and therefore able to keep the promises He made, then that changes everything. There is no middle ground, He is either God or a lunatic on the same level with a man who says he is a poached egg, to borrow a phrase from C. S. Lewis.

In 2013, Time Magazine ranked Jesus Christ as the most significant figure in history. I doubt Jesus cares for such accolades but as a historical figure, this illustrates that He is well-known and studied. Interestingly, both Christian and non-Christian agree on the following facts concerning Jesus. 1) He was a real person that walked this earth just as you and I today 2) He died on a cross 3) His followers believed He rose from the dead 4) shortly after His death, the number of His followers grew substantially. These are facts that the Bible also concurs with. However, there are quite a few people who aren’t aware that no serious historian would object to any of those facts because there is so much historical evidence to back up those four statements. They are virtually indisputable. I state those facts because I believe the Christian faith stands up to scrutiny. God is not afraid of scrutiny. Thomas, one of Jesus’ disciples, famously said he would not believe that Jesus had risen from the dead unless he put his finger in the wounds made by the nails [John 20:25]. Remarkably, Jesus allowed Thomas to do just that [John 20:27]. As such, I invite anyone who is seriously seeking to know Jesus to examine these facts for themselves.

Briefly examining them though, the first and seconds assertions are a matter of historical records. However, the third and fourth assertions raise questions about his followers. One could make at least three claims about them. His followers could have been deceived, deceived others or deluded. Consider the first claim that they were deceived. Who would have done the deceiving? The political (the Romans) and religious (the Jewish leaders) authorities of the day both wanted Jesus dead because they both considered Him a threat to their authority. They made a public spectacle of Jesus ensuring He died in the full view of the people to deter others from following in His steps. Historical records of what happened to leave no room for deception by any of the parties that could have been capable of it.  As for the claim that they deceived others, a vast majority of Jesus’ followers were both illiterate and poor. As such, they would not have had the wherewithal to pull off the greatest cover-up in history against one of the strongest political powers ever and some of the most zealous religious leaders of the day. As for the third claim, following Jesus in those days meant persecution, being an outcast and in all likelihood martyrdom. There is nothing like the threat of death to challenge anyone’s beliefs in a cause.

In examining the agreed-upon facts about Jesus, it is difficult not to draw the conclusion that something did happen. Jesus was no ordinary man. My claim and that of countless others throughout history is that He is (not was) God. He did indeed walk this planet, he died on a cross and then He rose from the dead and He lives today. He will come back one day as Judge to right all the wrongs on this planet and to those who believe in Him, He will give a new life. They will get to spend eternity with Him in His kingdom where there will be no sickness, sorrow, suffering, pain, death or any of the evils that plague this planet. They will live in abundance in perfect joy, happiness and love. The Christian faith holds out life with Jesus rooted in this hope and you have the God-given option, the freedom of choice, to accept or reject it. As Blaise Pascal once said: “If I believe in God and life after death and you do not, and if there is no God, we both lose when we die. However, if there is a God, you still lose and I gain everything.” The option is yours, examine the facts and choose wisely, your life does depend on it.

Thanks for the reassurance & reminder, Charles.

‘…God is not afraid of scrutiny.’

Another great message. Thanks Charles.