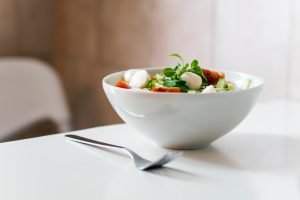 It is fascinating to see how our walk with God can mirror real life. New-borns are completely dependent on others to do everything for them. They are bathed, fed, clothed, etc by others. As they grow, they slowly become more and more independent. As toddlers, they may be able to feed themselves but rely on someone else to prepare the food; they may be able to dress themselves but rely on someone else to buy or choose the outfit for them. Eventually, they get to a phase in life where they are adults and independent. What was once someone’s choice for them becomes their choice to make. The dependence that marked childhood goes as they enter into maturity. This is the necessary progression from infancy to adulthood.

Similarly, what we eat changes through the different phases of life. We start with milk, gradually progress to soft solids mashed together so that it is easy to consume and eventually solid food. This is true of our spiritual diet. In the first epistle to the Corinthians, Paul rebukes the church in Corinth for still needing to be fed milk because of the way they lived; the arguments they had with one another showed that they were still behaving as infants in the faith rather than mature believers. He says this “…but for right now, friends, I’m completely frustrated by your unspiritual dealings with each other and with God. You’re acting like infants in relation to Christ, capable of nothing much more than nursing at the breast. Well, then, I’ll nurse you since you don’t seem capable of anything more. As long as you grab for what makes you feel good or makes you look important, are you really much different than a babe at the breast, content only when everything’s going your way? When one of you says, “I’m on Paul’s side,” and another says, “I’m for Apollos,” aren’t you being totally infantile?” [1 Corinthians 3:1-4 MSG].

I wonder what He would say if he were to observe some of the squabbles amongst Christians and the various denominations. How would he address us if he observed how we deal with the world around us and each other? I wrote a while ago about the undecided young person in church coming to terms with the choices he or she must make regarding their faith. If they do decide to commit to the faith, then they are expected to grow just as an infant is expected to grow. The fruit of that growth is evident in how they live. Just as you can tell a person’s level of maturity by their actions, you can also tell a believer’s level of maturity in the faith by how they relate to God and to others. The hope is that the longer a person is in the faith, the more mature their thoughts, words and actions in every facet of life. However, this doesn’t seem to be the case with every Christian, so often many do not grow. Years after coming to the knowledge of Christ, they continue to behave like infants. I believe we must all ask ourselves how committed we are to growing as Christians. Are we being deliberate about working out our salvation [Philippians 2:12]?

One of the things that is vital to healthy growth from infant to adulthood is nutrition. While milk is all a baby can have, in no other phase of life is milk sufficient. Yet, there is a danger in the Christian life that our diet doesn’t evolve past milk to solid food. It is possible to plateau at the infant stage if deliberate effort is not made to grow. This is evident in one’s understanding of who God is and how we deal with the circumstances of life and each other. There was a time in my life I imagined God to be an old man with a white beard, akin to a cosmic Santa Claus and I related to Him as though He was Cinderella’s fairy godmother. That god in my head was created in my own image and bore no relation to the God of the Bible. My expectations of Him were shaped by my erroneous understanding of who He was and what He is about because I hadn’t set aside the time to dig into His word and get to know Him. I was therefore stuck with the basics I had learnt in my childhood. All I knew about God and His word was what someone else told me, I was incapable of understanding anything beyond the basics of my faith. I acted very much as an infant and therefore had to be fed milk until I made a deliberate effort to change. Paul tells us we must put away childish behaviours [1 Corinthians 13:9-11], this is a necessary step of maturing to adulthood.

Adults generally prepare our meals or at least determine what we eat. As a Christian, how much of a say do you have in the meals you consume? Are you reliant on someone else to prepare the meal and feed you and therefore, they choose what you eat? Are you reliant on just what your pastor says? Do you only eat on a Sunday? How much of what you profess as a Christian is what someone else told you? Are you an adult Christian who is able to discern God’s truth as it is laid out in His word for yourself? God is active and always doing something in our lives, in the lives of those around us and in the world at large. He is looking for mature adults to partner with Him in His redeeming work. Are you a partner He can count on? Has your diet equipped you for work in God’s vineyard?

The “unspiritual dealings” amongst Christians Paul addressed at the beginning of 1 Corinthians 3 are still prevalent today. Some Christians act without integrity, fret about the same things like the rest of the world and essentially, behave in exactly the same way as unbelievers who haven’t received the Spirit of God [1 Corinthians 2:12]. As such, they have to be told over and over again that they should not be doing these things as someone would correct an infant. Their faith hasn’t gone beyond the basics. We distinguish ourselves based on which Church we attend or which preacher we listen to. A mature Christian ought to be able to tell if God’s Spirit is present in a church and quite frankly if a church is good enough for the Holy Spirit it’s good enough for me. Also, a mature Christian ought to be able to discern truth from error [1 Corinthians 2:15] regardless of the preacher because no preacher is infallible. Therefore, we ought not to argue about these things.

For those of us who have been Christians for a while, our thoughts, words and actions (works) should be good indicators of how much we have grown. What would the way I live my life say about the diet I need? Would my life show that I have grown as a Christian? The author of the letter to the Hebrews said this to a community of Christians of whom he expected much more: “…for though by this time you ought to be teachers, you need someone to teach you again the basic principles of the oracles of God. You need milk, not solid food, for everyone who lives on milk is unskilled in the word of righteousness, since he is a child.  But solid food is for the mature, for those who have their powers of discernment trained by constant practice to distinguish good from evil” [Hebrews 5:12-14]. Would he say the same about you and me?

Many of us identify with a particular political ideology. It determines how we vote and in some cases, becomes part of our […]

I often hear people say “I’m sold out to Jesus” or “I have given my life to Christ”. I understand what they […]


‘Not by might nor by power, but by my Spirit,’ says the Lord Almighty.”
‭‭Zechariah‬ ‭4:6‬ ‭NIV‬‬.
May His Grace be sufficient for us in our walk with Him. Thank you and God bless you.

What do you want to believe?

Is there any room?