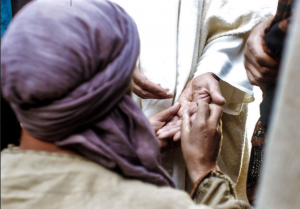 Is it ok to admit that you have doubts? Maybe it was my paradigm, but as a Christian growing up I felt having any sort of doubt was anathema to my faith. Moreover, everyone else around me seemed to get it and they were soldiering on. What made matters worse was that I didn’t feel I could ask questions which would unveil my doubts. It may have been my pride or the culture but looking back, I just didn’t have the courage to say, excuse me “but that doesn’t make sense to me!”. So I just went along with what everyone else was doing. They seemed to know what they were doing.

Thomas, one of the Jesus’ disciples, gets a bad rep because of his response to being told Jesus had risen from the dead. The first time Jesus appeared to His apostles after His resurrection, Thomas was not present.  When his friends recounted the story of seeing the resurrected Jesus, he flat out refused to believe it. He wouldn’t believe Jesus had risen from the dead unless he could see and touch Jesus for himself [John 20:25]. Therefore, he became known as doubting Thomas.

I used to call him doubting Thomas too but that has changed. It is interesting how you miss things in the Bible until someone else points them out to you. Thomas is referenced on at least two other occasions in John’s gospel. In John 11, a close friend of Jesus, Lazarus of Bethany is sick and Jesus wants to go see him. In Bethany, Jesus is a wanted man [John 11:8] and while the other disciples are trying to dissuade Jesus from going, Thomas says, let’s go with Jesus, even if it means death [John 11:16]. In John 14, Jesus is trying to prepare the Twelve for His imminent death and assure them everything will be ok. He says to them: “where I am going, you know the way” but Thomas retorts: “Lord, we don’t know where you are going, so how can we know the way?” [John 14:5 NIV].

So what can we learn from Thomas? Well, the first thing I learn from John’s account of Thomas is that he was loyal. He may not have understood everything Jesus was teaching but Jesus made enough sense to warrant his commitment. Also, he was willing to ask questions if he didn’t understand and he is not cowed by peer pressure.  As a result, He saw Jesus raise Lazarus from the dead [John 11:38-44]. How committed are you to your faith? Thomas didn’t internalise or brush away his doubts. He owned them and asked questions. We take the first 4 verses of John 14 for granted but imagine how they must have fallen on Thomas’ ears. Yet, he was bold enough to say Jesus I don’t understand! It was this that led Jesus to say: “I am the Way, the Truth and the Life” [John 14:6].

I do wonder what Thomas was thinking during a discussion in Matthew’s gospel when Jesus asked His disciples who they thought He was [Matthew 16:13-20]. Peter seemed sure [Matthew 16:18] but was Thomas? Since the Bible is silent on this, I can only imagine that while he may have understood that Jesus was the Son of God with his head, the implications hadn’t taken root in his heart. In one sense, that is where a lot of us are and this is where doubts creep in for me. However, I believe that Jesus will not rebuke any Christian honestly grappling with doubts but earnestly seeking answers, unwillingly to accept someone else’s revelation or theology if it doesn’t make sense to them.

The second time Jesus visited His disciples, Thomas was present. Jesus went straight to Thomas and revealed Himself to him. This time everything made sense and Thomas’ doubts melted away as he responded: “my Lord and my God” [John 20:26-28]. This time it was personal for Thomas, it was not Peter’s revelation, it was his encounter! Afterwards, he would happily heed Jesus’ warning never to doubt again, even when it would cost him his life.

So what do the rest of us who may never get to examine the scars of the resurrected Jesus do with our doubts? To start with, I think we must own it. Thomas spent 3 years at the feet of Jesus and still had doubts, so having doubts is ok but we cannot stop there. Our faith and our reality may not always converge and it may make us doubt God but doubt can be fertile soil for faith to grow if we honestly take them to Jesus. Personally, I hang my hope on the fact that Jesus said I should ask and I will receive; seek and I will find; and when I knock, the door will be opened for me [Luke 11:9].

For me, Jesus makes enough sense to warrant my commitment and loyalty to Him. No other worldview offers the hope Christianity offers and the value Jesus places on me, no one else does. Also, I now know that when I have doubts, Jesus neither rebukes nor disqualifies me. Most importantly, I know that  just like He did with Thomas, He will meet me where I am because I can truly to say to Him: “Lord, to whom shall I go?” [John 6:68].