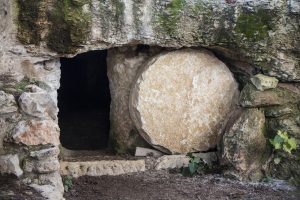 Yesterday we commemorated an event which has only happened once in the history of the world. 2000 years ago, Jesus of Nazareth was gruesomely tortured and killed. However, 3 days later, He rose from the dead. Jesus, after His resurrection, appeared to more than 500 people over 40 days. In some cases, He even shared a meal with them. Most historians no longer argue whether Jesus existed or died on a cross. Moreover, for those who saw Him after His resurrection, it changed everything for them. His resurrection was confirmation that everything He said about who He was, was true.

The resurrection of Jesus is the hinge-point of Christianity. If Jesus didn’t rise from the dead, then Christianity is pointless and Christians are to be pitied [1 Corinthians 15:14]. However, if Jesus rose from the dead, then just like the original witnesses, it changes everything for us who believe. I find it fascinating that before we can receive anything from God, we must first believe. For instance, we can’t do anything to earn eternal life nor can we do anything to earn God’s love or favour. It is given freely but we need to believe to receive it. Furthermore, the things we believe inform our convictions and ultimately, determine our actions. As such, our beliefs have practical implications.

Recently, a friend who is a doctor recounted two stories which encapsulate the implications of our beliefs. First, she recounted giving an elderly lady a lift recently. She had driven past a lady waiting at the bus stop on her way to drop her child at nursery. On her way back about 30 minutes later, the same lady was still waiting for a bus. She pulled over and gave her a ride. It turns out the lady had just finished a night shift. She had an arduous journey of a bus ride and a 20-minute walk home. So, the lift home was a real blessing.

My friend understands the dangers of covid-19, she sees it every day at work. But fear wasn’t going to stop her from helping someone in need. Jesus never ignored a stranger who needed His help, neither can we. From God’s perspective, doing good works, especially at a time when others are choosing self-preservation, is the outworking of our salvation which comes through faith in Jesus [Ephesians 2:8-10]. My friend demonstrated that anyone who truly believes that Jesus is alive cannot be held back by fear. Because in rising from the dead, Jesus demonstrated His sovereignty over anything that would hold us captive. This is walking in victory for believers since we know that Jesus has the final say over our lives.

Her second story was more arresting. As a group of us discussed the implications of the love of God, she told us about a lady in her church who was involved in a car crash. She was driving home from church with her pre-teen son when an onrushing vehicle collided with them head-on. Her son died instantly and she survived with serious injuries. This is pretty much every parent’s worst nightmare. My friend told us that although this woman was grieving and in pain, her belief in God’s love was unshaken. She kept telling those who visited her that God loved her despite what she had just experienced [Romans 8:33-37]. She didn’t minimise her tragedy but she believed that since Jesus triumphed over death, death wasn’t the end for her or her son. She will see her son again in a place where there will be no more suffering, pain or death forever. As such, she can grieve with great hope.

The danger for Christians is that our faith can become academic. As someone put it, we can become travel agents handing out advice and brochures to destinations we’ve never visited. The Christian life is meant to be practical. Our witness should be based on experience and our convictions grounded on the truth that Jesus rose from the dead. As such, the fruits of what we believe should be evident in our lives. After His resurrection, Jesus left the continuation of His ministry to His first disciples. These disciples lived their lives with such conviction that their message has endured through the centuries. Christianity exists today because they faithfully lived out what they believed and preached. They faced untold pressures to renounce their faith and most of them were martyred, but their convictions never wavered. Are my convictions as strong as theirs? Do I believe the truth of Easter enough to die for it? Do you? Before you answer though, think of the stories above, how would you have handled those situations? How does the truth of Easter dictate how you live today?

For the non-Christian, my question is simple: if Jesus, having made all the claims He made, rose from the dead, what would that mean for you? Christianity is true, but if weren’t true, would you want it to be? As I mentioned in a previous blog, you can examine Jesus and His claims for yourself. Because if His claims are true, then His resurrection has significant implications for you. Furthermore, whether those implications are positive or negative for you depend on your response. In the history of the world, only Jesus of Nazareth has defeated death. This means Jesus is alive today. He says He has authority over everything in creation. He also says He holds the keys to life and death. Easter is the ultimate justification of all His claims. Additionally, He says He will give abundant life to anyone who believes in Him. A life free from anxiety or fear, including the fear of death. If all this is true, do you want that life?

Easter is always a time of reflection for me. I came to know The Lord over 41 years ago, He’s been Faithful and everything to me. I cannot even imagine where I would have been without Him in my life. I have a past that I can’t change, but Jesus went into those places of sin and failure, wipe the slate clean, and give me a new beginning. He knows the worst about me, yet He believes the best. In His hands I am safe and secure. He is Alive Hallelujah!

The thin slice of time