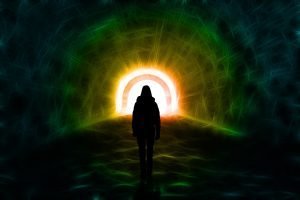 “You are going to die.” Do you find that statement jarring? I do, I often find it uncomfortable talking about death. I guess having been raised in a culture where death was feared, it is difficult to be comfortable with the thought of dying. However, the inescapable truth is that one day, I will die and you will too, but will that be the end of our existence? Is there anything to look forward to beyond death? Is there anything that diminishes the dread of death?

Some worldviews argue that there is nothing beyond death, we simply cease to exist. Personally, I find that depressing because there is a lot wrong with this world and something in me wants to believe that someday those wrongs will be made right. There are worldviews that suggest that there is an afterlife but I am yet to come across one that offers hope beyond the grave to everyone regardless of sex, race or status as the Christian worldview does. It paints a picture of a glorious afterlife when the wrongs of this world are made right permanently [Revelation 21:1-5]. It renders death as a conduit to an eternity with God filled with love, joy and abundance where suffering, pain and death no longer exist.

Sometimes people present Christianity as a worldview that is helpful or comforting and we can easily forget that Christianity makes claims about life and death that are either true or false. If what the Bible says is false, it isn’t worth believing no matter how helpful or comforting it might seem. Yet, if it is true, even if it is not helpful or comforting, we can’t ignore it. So, the fundamental question I have to answer is: “is the worldview presented in the Bible true?” Obviously, no worldview can prove its stance on life after death but we can evaluate worldviews based on the clues around us. We can examine if a worldview is rational, supported by the weight of evidence and relevant to everyday life. It is up to each of us to examine those clues and make a decision because our worldview impacts our choices and how we live our lives. This is one decision too important to be made from incorrect data. As Blaise Pascal famously argued: “If I believe in God and life after death and you do not, and if there is no God, we both lose when we die. However, if there is a God, you still lose and I gain everything.”

As I mature in my Christian faith, I find death increasingly less terrifying because of the promises in God’s Word. Those promises all hinge on one historical event – the resurrection of Jesus. Paul puts it this way: “…if [Jesus] Christ has not been raised, our preaching is useless and so is your faith.” [1 Corinthians 15:14 NIV]. It is a historically verifiable fact that Jesus lived and died by crucifixion 2000 years ago. However, my claims along with millions of Christians is that He rose from the dead, He is alive today and He is the God who created the universe. These claims are either true or false. If true, they undeniably change everything, including what happens after we die. If you dispute the resurrection of Jesus like Frank Morison, who wrote Who Moved The Stone, once did, then follow his example and diligently scrutinise the evidence for yourself.

Have you seriously considered what will happen to you after you die? This isn’t a question you can ignore because death is inevitable. My appeal to you is that the God who created you wants you to know Him [Romans 1:19]. He wants you to invite Him into your life. He will never pressure you into letting Him in because doing so would violate your freewill but know that He loves you and wants to adopt you as His child [Romans 8:15]. He wants to rid you of all your fears and shortcomings and fill that God-shaped vacuum in your life. He wants make you more like Him [Romans 8:29]. How are you going to respond?

Jesus told His followers that one day He will return as God to judge the world [Matthew 25:31-32]. He also told them that those who reject Him in this life, He will reject on that day [Matthew 10:33]. If these statements are true, then we will all face Jesus after death. Are you ready to face Him? Are you ready for what happened next? Ignorance won’t be a defence if you choose to ignore Him in this life. The Bible teaches that we have two possible destinies after death; eternity with Jesus in His kingdom or eternity without Jesus in hell. People often dispute that a loving God will not send people to hell. Well, God doesn’t send people to hell, people choose hell. Hell is simply a place without God. If you choose to reject God in this life, how would it make sense to spend eternity with Him? On a very practical level, heaven is a place where everyone is like Jesus. How will you fit in if you are not like Him?

One thing I can’t overstate is this: the love Jesus has for you compelled him to come down to earth as a man. He came to die for you so that you could spend eternity with Him. He destroyed the frightening prospect of death, rendering death powerless over those who choose to follow Him. Because of Him, something far better awaits them beyond death. While you still have breath, you can choose the afterlife you want. God has given you the freedom to decide what happens next. How will you choose?


Thanks Charles for this great reminder. I believe there’s life after death where all things will be made right.

Is there a right way to live?

What is your Isaac?