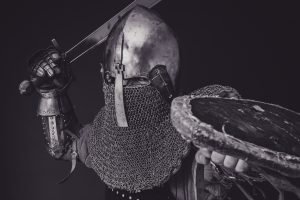 When was the last time you heard a sermon on Spiritual warfare? I haven’t recently and it’s just not something talked about much in most churches. Why is this? During Jesus’ ministry, He dealt quite frequently with demons and demonic activities. In one of such stories recorded by Mark, a young boy possessed by an evil spirit is brought before Jesus. The boy was unable to speak and suffered from violent seizures intermittently [Mark 9:14-29]. This was life-threatening and had been going on for a while. After casting out the demon, Jesus told His disciples that such situations could only be dealt with by prayer[v29]. If that happened today, it’s highly probable that the boy would be locked up in a mental asylum. I guess the question is: has demonic activity ceased or have we become so sophisticated that we are oblivious to it?

The book of Daniel reveals how unseen powers battling behind the scenes affect what happens down here on earth [Daniel 10:12-13]. As C. S. Lewis puts it: “there is no neutral ground in the universe. Every square inch, every split second is claimed by God, and counterclaimed by Satan.” As followers of Jesus, we are commanded to bring God’s kingdom into this world but we are also told the devil is the god of this world [2 Corinthians 4:4]. This means we have a battle on our hands because the devil will not give up without a fight. Therefore, we are warned that our battle isn’t with flesh and blood (i.e. what is visible) but against unseen demonic forces [Ephesians 6:12]. As such, each day there is a battle raging to obey God or do as we please as we live out our lives, especially in our hearts.

We are also warned to be alert and sober-minded because the devil is prowling around like a lion looking for someone to devour [1 Peter 5:8]. If the devil is actively working against the kingdom of God, are we discerning enough to identify his activities? Not every bad thing we encounter is a demonic attack, some are consequences of our choices but chances are good that where we encounter pervasive immorality, idolatry, injustice, violence, and oppression, we are witnessing demonic forces at work. Also, think of the things in your life that distract you from serving God. Or the subliminal (or sometimes overt) messages on our phones and televisions subtly desensitizing us and blurring the lines between right and wrong, especially for our children. Are we discerning the spiritual forces at work or are we either fighting in the flesh or worse still, distracted by things? Where is the spiritual rage against these works of evil?

With the devil actively seeking to steal, kill and destroy [John 10:10], it should come as no surprise that God’s children will be targets of demonic attacks. I suspect that the more visible and famous such a Christian is, the more of a target he or she is. If the devil can bring down a prominent Christian like the leader of a church, there is usually a ripple effect which can cause others to lose their faith. Ultimately, he wants to bring down as many of God’s children as he can, so he will seek opportunities to inflict maximum damage.

Remember Jesus’ warning to Peter, the most prominent of the Apostles?  “Simon [Peter], Simon, Satan has asked to sift all of you as wheat. But I have prayed for you, Simon, that your faith may not fail. And when you have turned back, strengthen your brothers.” [Luke 22:31-32 NIV]. The sifting is still going on today among God’s people. Aren’t we tired of seeing church leaders embroiled in scandals? Aren’t we tired of seeing the Church’s name dragged through the mud? Aren’t we tired of seeing young Christians lose their faith? Are we not fed up of immorality, injustice, violence and idolatry around us? The answer to this isn’t a shoulder shrug or complaining, it is prayer!

In the book of Revelation, Jesus accuses one of the churches of being lukewarm and indifferent [Revelation 3:14-19]. This was a church that had an abundance of material things. It is a warning to be heeded in our day as so many Christians and churches distracted by the pursuit of material things and lukewarm in the things of the spirit. This usually leads to a permissive lifestyle which provides an ideal breeding ground for sin. Eventually, there is a spiritual callousness that numbs the voice of the Holy Spirit meant to convict us of sin [John 16:8]. When this happens, there is an absence of the Power of God because the Holy Spirit will not forcibly impose Himself on those who ignore Him. Ultimately, such Christians and such Churches become easy prey for the devil.

In our battle against the devil, we need to be aware of our weapons of warfare because God has equipped us for battle [Ephesians 6:10-18]. He has also guaranteed our victory through the blood of Jesus [Revelation 12:11]. However, we only experience this victory when we step into the battle with our weapons of warfare. Sadly, too many Christians are either preoccupied with the things of this world (money, power, fame, sex, etc) or ignorant of the authority and power God has bestowed on us [Romans 8:5-11] because we don’t spend enough time in prayer and studying God’s word. It is time for us to open eyes to demonic activities around us, to be discerning and alert, ready to wage war against the kingdom of darkness. Someone once said that “the greatest trick the devil ever pulled was convincing the world he didn’t exist.” Let’s not fall for that trick!

Great insight!
Looking at our surroundings and what’s happening in the world, the devil is surely at work. But it shouldn’t come as a surprise to us as we’ve been warned “And because lawlessness will abound, the love of many will grow cold.” Matthew‬ ‭24:12 NKJV