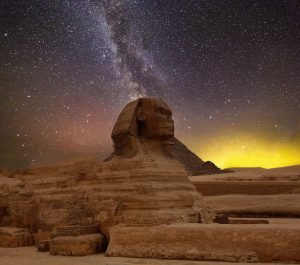 What we do when the going gets tough is very instructive. It is good practice to observe and review your actions in moments of trial. We may have a default place of refuge in those times or people we run to for comfort in those lean periods of our lives.  This is also true of those times when we have our hearts set on a particular course of action or something we desire strongly. It can be very difficult for us to listen to words of caution. Even when we do hear words of caution, we may find a way to convince ourselves that our course of action is right and forge ahead. We can be very adept at rationalising our actions.

I find repeated examples of God’s people desiring or going to Egypt when the going got tough. We see in Genesis 12 that when there was a severe famine where Abraham was, he went down to Egypt [v10], a decision that didn’t end well for his wife[v11-16]. In Genesis 26, Isaac and his family are also faced with famine. This time God warned Isaac not to go down to Egypt and Isaac obeyed [v1-6]. In Genesis 42, there is another famine and this time Jacob sends his sons to Egypt. In Egypt, they not only find food, but they also find their long-lost brother Joseph. Joseph, now the second most powerful man in Egypt relocated his entire family to Egypt [Genesis 46]. However, this time Jacob went with God’s blessings [Genesis 46:1-4]. As the years passed, Jacob’s family, the Israelites, would become slaves in Egypt. God would subsequently use Moses to deliver them and lead them to the promised land. Despite having been in bondage, on several occasions during the journey from Egypt to the promised land, the children of Israel repeatedly wish they could go back to Egypt.

Even centuries later, Egypt remained a place where the Israelites would want to run to when the going got tough. In Jeremiah 39, the Bible records the Babylonian invasion of Jerusalem. The city was laid waste, the king of Judah and his nobles were captured, the temple and the royal palace were destroyed and most of the people were taken in exile [Jeremiah 39:1-10]. Jeremiah is delivered for this disaster [Jeremiah 39:11-18] and he remained in Jerusalem with those left behind. Life was obviously very difficult and there was already a consensus among those left behind to leave the land and flee to Egypt. However, they wanted confirmation from God that they should.

The people approach Jeremiah and ask him to inquire of God what they should do [Jeremiah 42:1-6]. They promised to obey whatever God required [v6]. Jeremiah comes back 10 days later with God’s answer. Jeremiah tells them that God wants them to stay in Jerusalem. If they stayed, God promised to plant them firmly [v10] and rescue them from the Babylonians [v11]. Jeremiah also added a warning that if they disobeyed and went to Egypt, the war and famine there were running from would follow them to Egypt and they would never see their homeland again [v15-18]. Sadly, the people disobeyed. Their rationalisation was that God did not send Jeremiah to say those things and so, those determined to go to Egypt went [Jeremiah 43:1-7]. Just as God promised, the Babylonians attacked and defeated Egypt and brought on them the same disasters they had brought on Jerusalem.

Is there an Egypt in your life? A place that seems to have an answer to your desires? Is there a relationship you seek refuge in during the lean seasons of life? Is there something you desire so much that you struggle to listen to the warning of the godly men and women around you? When God’s word is clear on what you should or shouldn’t do, do you like those Israelites who had already made up their minds, find an excuse to do as you intended? Are there Jeremiahs in your life who are advising you against a course of action? Are you listening?

While there were instances in the Bible where God approves for His children to go to Egypt, Jacob in Genesis 46 and Joseph in Matthew 2 for example, I find that Egypt was usually temporary. Furthermore, I find that if going to Egypt was as a result of walking by sight instead of faith, it ended in disaster. Moreover, when the children of Israel went to Egypt despite Jeremiah’s warning, they lost their way and ended up being corrupted by the influences around them. They became idolaters and lived in willful disobedience [Jeremiah 44:15-30]. They didn’t learn from what had happened to their kinsmen in their homeland and they too incurred God’s wrath.

If our desires rule our judgment or when the going gets tough, it is possible for you and me to find ourselves in Egypt if we do not seek God’s face and resolve to obey His will for us. As we have seen time again, it doesn’t end well for those who go to Egypt without God’s blessing.


Food for thoughts for the next couple of days. I would like to think the first place I go to when trouble strikes is on my knees but I know very well I get plagued with anxiety before I realise Jesus is waiting to either walk me through it or get me out. My prayer is that someday, my response to whatever situation may come my way, would be to Trust and approach His majesty for He will not lead me astray even if I may have to go through. Thanks Charles for this very important reminder.


Wow! What a great insight. Thank you Charles.
May we find strength to trust The Lord when the storm comes against us, and believe His word when everything seems dark.

Do you ever just let God love you?