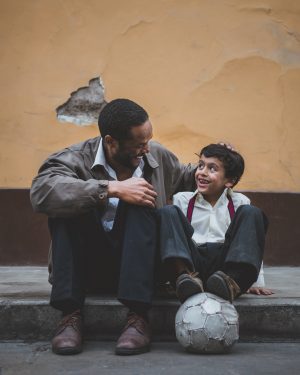 Growing up, did you have people around you who modelled virtues like honesty, humility, patience, fairness, kindness, love? I had one or 2 but I imagine that if I was growing up today, it would be difficult to find role models. Maybe it’s my naivety but it does seem like there are more scandals now than there were 2 or 3 decades ago. We live in an age of scandal, it is so prevalent that we are no longer shocked by it.  It is as common in the church as it is outside the church, as common with those that are famous as it is with those who aren’t. Even when we see people trying to model these virtues, the cynic in us tends to suspect that they are hiding something and sadly, that cynic is often proved right. Very few are above reproach these days or at least, that seems to be the prevailing thought in today’s society. As such, too many young people are growing up without role models.

One of the numerous ways God is at work in my life is that each time I write, I can’t fail to ask myself, “are you an example of the things you write about?” If I were to die today and my wife and kids could write what they honestly thought of me on my tombstone, what would they write? Better yet, what would they write if they could go through the hidden parts of my life? I wrote several weeks ago that God is not afraid of scrutiny, He wants us to search and dig deeper into Him and His word because He knows we won’t find anything false. On the contrary, very few of us would want our lives under the microscope. However, if we are to be blameless (not sinless) before God, our lives must stand up to scrutiny. We must live the gospel we profess and model Christ to the world. To do so, we must live lives of integrity. Integrity for me is when how you live your life in public and in private pleases God. For the Christian, living a life of integrity is a minimum requirement. God expects this of all us [Micah 6:8].

Daniel is a case study in living blamelessly. While in captivity in a pagan society, he chose to live according to the law of God. Interestingly, he was able excel socially in that environment living God’s way (something worth noting for anyone who says you can’t live like a Christian and do well in life). He earned a position of authority and the favour of a pagan king while holding firmly to his principles. This made him stand out but also made him enemies. The Bible says “…Daniel so distinguished himself among the administrators and the satraps [the political class] by his exceptional qualities that the king planned to set him over the whole kingdom.  At this, the administrators and the satraps tried to find grounds for charges against Daniel in his conduct of government affairs, but they were unable to do so. They could find no corruption in him because he was trustworthy and neither corrupt nor negligent. Finally, these men said, “We will never find any basis for charges against this man Daniel unless it has something to do with the law of his God.” [Daniel 6:3-5 NIV]. Would our adversaries say the same thing about us? These men really wanted to bring Daniel down, so they looked thoroughly at his life and could not find anything they could use against him apart from the fact that he kept God’s laws. Another thing that amazes me about the story of Daniel is that he was a favourite of the king despite living contrary to the pagan laws of his kingdom, they should not have been friends. Intriguingly, the Book of Proverbs says this “When the Lord takes pleasure in anyone’s way, He causes their enemies to make peace with them” [Proverbs 16:7]. God honours integrity.

Jesus once said of a man called Nathaniel, “…there is no duplicity in him” [John 1:47]. I wonder how many Christians he could say that about today. Would He say the same about you and me? Is our life so above board that even our enemies cannot find anything against us? Are we honest in our dealings with others especially when no one is looking? Do we speak the truth especially when it is likely to cost us something? Are we faithful to our commitments especially our marriages? Do we cut corners at work when no one is looking? Do we keep our word to those who can hold us accountable or those who can’t? Do we cheat especially when we think there are no victims (tax returns for instance)? Is there something hidden in your life that would shock those closest to you if it ever came to light? The truth about duplicity is that we cannot fool God. He sees it all but also, it eventually gets out. Very few get away with it in the sense that the people around you never find out.

Where does this post find you? Are you living a life of integrity? Is your answer to that question the same as those closest to you? I have observed that people rarely ever say what they really think of someone when they are alive, however, they will be very candid after you are dead. In one sense, what people say about you after you are gone is your legacy. What would you like that to be? When I write a post, it is emailed to my children. One day, they will get to read them. My hope is that they would have seen me live my theology because they are watching. It would be a shame if they cannot reconcile the person writing what they are reading with the father they know. I would have failed them as a role model.

Living a life of integrity is impossible without grace. John tells us that grace comes through Jesus Christ [John 1:17]. If you have not met Jesus, then grace is alien to you. Moreover, what reason would you have to live a life of integrity? If that is you, don’t delay, ask Jesus to come into your life and change you from within (reach out if you want to know more). Your life will never be the same again. However, if you have come to know Jesus but there is lingering duplicity in your life, then you must deal with it. Ask Jesus who defeated every stronghold that would ever hold us captive, to give you the grace to get rid of the duplicity in your life. He offers us His Holy Spirit as a companion through life to lead us to live integrous lives and it is His desire that we model integrity to the world as He modelled it to us.

Thank you Charles for another wonderful message. In this day and age we need such a reminder to reflect on our lives. God bless you.

How do you use your power?

You are called to be a role model